Posted by Lindsey on July 22, 2018
In July 1802, Dorothy Wordsworth and her brother, the poet William, visited Rievaulx Abbey during their travels around Northern England. Dorothy left an unforgettable description in her Journal.

“I went down to look at the ruins: thrushes singing, cattle feeding among the ruins of the abbey; green hilloes about the ruins; these hilloes scattered over with grovelets of wild roses and covered with wild flowers,” she wrote. “I could have stayed in this solemn quiet spot till evening without a thought of moving but William was waiting for me!’” 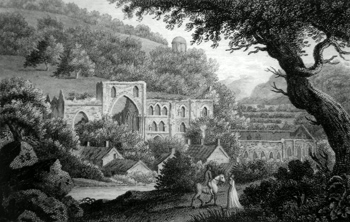 Rievaulx Abbey today is beautifully maintained and looked after but it is easy to imagine it as it was in the early 19th century. The Abbey must have been the perfect Romantic ruin. For 300 years, since the dissolution of the monasteries by Henry VIII in the 1530s and 1540s, it had gradually been reclaimed by nature. The ancient stone tumbled and was covered by grass; the crumbling walls themselves were covered by ivy and other vegetation; sheep grazed among the ruins.

It must have been quite an amazing sight for travellers in the 19th century.
Books Places Poetry Ruins Walks