Posted by Lindsey on July 22, 2018
This weekend we popped down to South Wales to visit a few ruins around the Welsh and English border. Our first stop was Tintern Abbey, a beautiful ruin on the banks of the River Wye, which inspired many of the Picturesque travellers as well as William Wordsworth and William Turner.

Tintern Abbey is described by William Giplin in his Observations on the River Wye as occupying "a great eminence in the middle of a circular valley, beautifully screened on all sides by woody hills, through which the river winds its course; and the hills, closing on its entrance and on its exit...a more pleasing retreat could not easily be found". 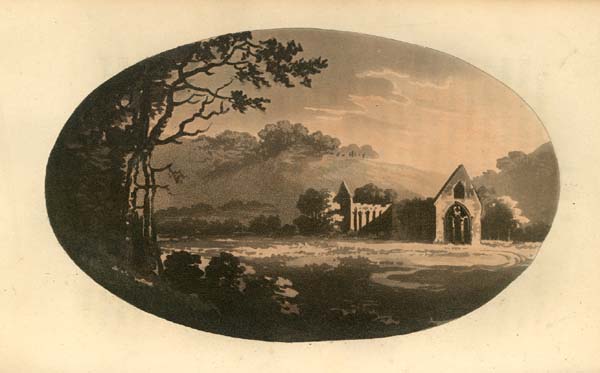 Gilpin describes the perfect Picturesque view, all of which can be found at Tintern: 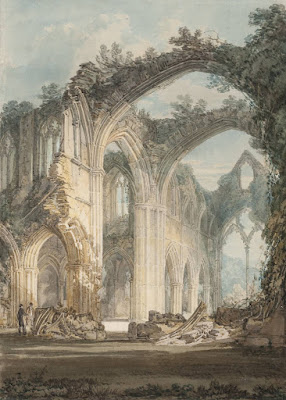 Ah! happy thou, if one superior rock
Bear on its brow the shivered fragment huge
Of some old Norman fortress: happier far,
Ah! thou most happy, if thy vale below
Wash, with the crystal coolness of its rills,
Some mould'ring abbey's ivy-veiled walls.

William Turner's painting of Tintern Abbey is well known and shows all the ingredients required of a good ruin: ivy-clad walls, romantic ruins and sequestred peace.

But, as much as I love Turner and Gilpin it is William Wordsworth's Lines Composed a Few Miles Above Tintern Abbey in 1798 which has the most resonance for me:

Five years have past; five summers, with the length
Of five long winters! and again I hear
These waters, rolling from their mountain-springs
With a soft inland murmur.—Once again
Do I behold these steep and lofty cliffs,
That on a wild secluded scene impress
Thoughts of more deep seclusion; and connect
The landscape with the quiet of the sky.

Such beautiful words and sentiments, all of which made our journey to Tintern something of a pilgrimage. I know that the beauty of Tintern Abbey will remain with me long after we return home and get back to the "din of towns and cities" and this is why the poem means so much to me:

But oft, in lonely rooms, and 'mid the din
Of towns and cities, I have owed to them,
In hours of weariness, sensations sweet,
Felt in the blood, and felt along the heart;
And passing even into my purer mind
With tranquil restoration....
Books Lovely stuff Places Poetry Ruins Walks