Posted by Chris on September 02, 2018
Since I last posted on this, a couple of things have happened.

First, a few people have asked me to explain what a smart home is, and how ours works. Second, technology has moved on.

The diagram is a simplified version of how it all fits together. 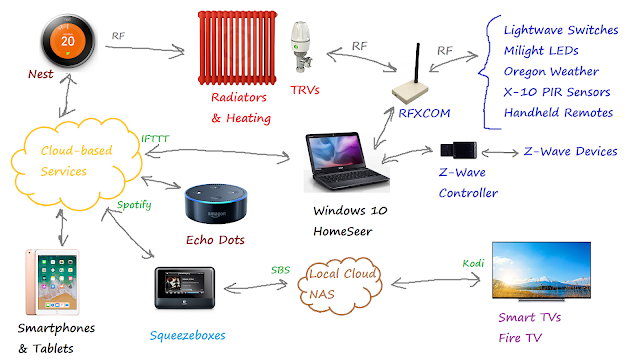 As the system has been entirely retro-fitted to our house the connections are wireless, either wi-fi or radio frequency (RF in the diagram) at 433 MHz.

Most smart home implementations try to lock you in to a particular manufacturer - Samsung SmartThings, say, or Philips Hue bulbs - and you can end up with a load of unconnected systems, each needing their own separate app and unable to communicate with eachother. This doesn't seem very smart. Our system allows devices from a wide range of companies to work together in a single open source system.

HomeSeer: this program is the brains of the system, running in the background on a 2010 vintage laptop, receiving information and sending commands to all sorts of connected devices, based on rules that we define. Although we use the cloud for certain non-essential functions, our system is mostly self-contained. If our internet connection goes down, things will carry on working.

RFXCOM: attached to the laptop, this hardware interface allows two-way communication with the devices around the house using radio frequency. The clever part is that RFXCOM can communicate with devices from dozens of different manufacturers, making it the Swiss Army Knife of the smart home. I'm also dabbling with Z-Wave devices, which are better but more expensive and need their own separate controller.

Heating: the Nest thermostat controls the boiler and central heating in an intelligent way. I posted about it when we had it fitted 2 years ago. We prefer some rooms to be cooler than the rest of the house so in these room we have radiator valves (TRVs), separately controlled by HomeSeer.

Music: is streamed from our 'local cloud' on a Synology network-attached hard drive. For multi-room music we use Logitech's Squeezebox range, still excellent despite being discontinued a few years ago. We can play our own music or stream from Spotify. One day we might upgrade to Sonos or something similar.

TV and Films: we use Kodi running on Amazon Fire Sticks attached to our TVs to stream content from the local cloud. We recently had our ugly television aerial and rusting satellite dish removed so for live or recently broadcast programmes we use the catchup services such as BBC iPlayer which only require a broadband connection.

Alexa: talking to pieces of hardware is fundamentally wrong but we now do it to improve the interface. Anything that HomeSeer can control, you can control using Alexa. So we can say 'Alexa, switch off the lights' rather than pressing a physical button - which means a more intuitive system.

This is the future. Let's get there before the crowds.
Technology