Alan Ayckbourn at the Old Laundry November is always an excellent month for theatre. This year the Old Laundry in Bowness-on-Windermere staged not one, but two Alan Ayckbourn plays: Joking Apart and Better off Dead. As we both love Ayckbourn, we decided to book for both performances.

Joking Apart is something of a departure for Alan Ayckbourn, he decided to break the habit of a lifetime and create a happy and successful married couple – “the kind of people whose fridge never goes wrong and who can always find a plumber at short notice” – whose friendship group is made up of other couples not as blessed as they are.

The action of the play spans 12 years, and all four scenes take place in the back garden of the annoyingly happy Anthea and Richard. Their less fortunate friends, summoned to various barbecues and parties, become increasingly embittered and neurotic over the years while smiling through the pain.

“Having created such paragons, as Anthea and Richard, I wanted to know what effect they would have on other characters,” Ayckbourn told a journalist. 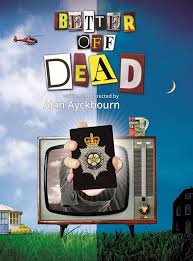 Despite his original intention of writing about a happy couple, it is in fact familiar Ayckbourn territory – middle-class angst under-scored by social hypocrisy. He has described it in the past as a play about winners and losers.

He wrote of the play: “I suppose it says that, in an imperfect world, the unremittingly perfect can prove to be just as much a source of unhappiness as it can happiness. As a theme it is likely to remain relevant so long as there are people who resent being created unequal and thus can never find it in their hearts to celebrate the good fortune or accomplishments of others."

We thoroughly enjoyed the play and looked forward avidly to the next performance: Better off Dead.

In Better off  Dead we were back on more familiar Ayckbourn territory with the washed up thriller writer Algy Waterbridge. The themes are familiar: confusion, the bluring of lines between reality and fiction and misunderstandings and mistaken identities.

Better off  Dead is Ayckbourn's 82nd play and there's no sign of the 79 year old playwright retiring from writing.

So, all in all, excellent entertainment and definitely up to the very high standard of Sir Alan Ayckbourn.
Theatre