A Day out in North Yorkshire

Posted by Lindsey on January 08, 2019
For the final day of our Christmas holiday we decided to take a trip along the A65 towards Skipton. Our plans were fairly fluid: a short walk and coffee in Clapham, a visit to Keelham Farm Shop for some delicious and interesting comestibles, and a walk round Bolton Abbey.

Clapham was lovely, very peaceful, although sadly no sighting of Alan Bennett! We're always hopeful. After a short walk round the village and a cup of coffee, we carried on towards Skipton and Keelham's Farm Shop where, as well as doing a spot of shopping, we also had a tasty lunch.

As the weather was lovely, cold and crisp, we decided to carry on to Bolton Abbey, in the hope that there wouldn't be too many people there. There weren't!

Bolton Abbey isn't simply an abbey, it's a whole village with Bolton Abbey Hall, the Priory Church of St Mary and St Cuthbert and a variety of buildings including a bookshop and the Devonshire Arms. The Abbey takes its name from the ruins of the 12th-century Augustinian monastery now known as Bolton Priory. The priory closed in the 1539 Dissolution of the Monasteries ordered by King Henry VIII.

The Abbey and village has been immortalised in both poetry and art including Turner's famous and iconic painting and William Wordsworth's The White Doe of Rylstone was inspired by a visit to the Abbey in 1807. The poem is based on a legend about the local Norton family. 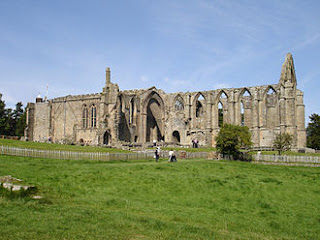 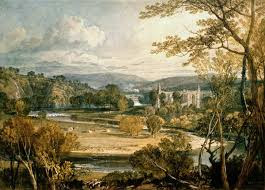 From Bolton's old monastic tower
The bells ring loud with gladsome power;
The sun shines bright; the fields are gay
With people in their best array
Of stole and doublet, hood and scarf,
Along the banks of crystal Wharf,
Through the vale retired and lowly.
Trooping to that summons holy.
And, up among the moorlands, see
What sprinklings of blithe company!
Of lasses and of shepherd grooms,
That down the steep hills force their way
Like cattle through the budding brooms;
Path, or no path, what care they?
And thus in joyous mood they hie
To Bolton's mouldering Priory.

Anthony Trollope writes about Bolton Abbey in his novel Lady Anna: "I wonder whether we could make an expedition to Wharfedale and Bolton Abbey. You would say that the Wharfe was pretty. We’ll try and plan it. We should have to sleep out one night; but that would make it all the jollier. There isn’t a better inn in England than the Devonshire Arms — and I don’t think a pleasanter spot. Aunt Jane — couldn’t we go for one night to Bolton Abbey?”

The Bronte sisters visited the Abbey in 1833 and Charlotte was inspired to create a drawing of the Abbey which was exhibited in Leeds in the same year and based, it is thought on a similar drawing by Landseer. 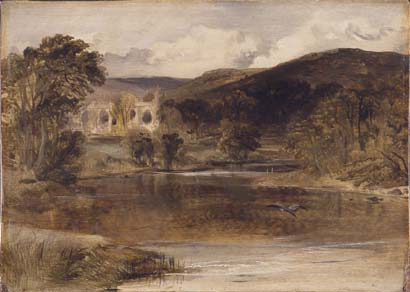 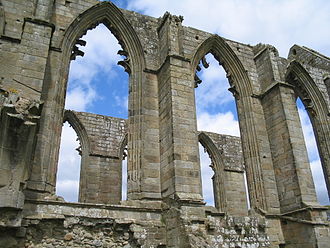 We had such a lovely day and the perfect ending to Christmas and New Year.
Books Lovely stuff Places Poetry Ruins Walks