Tartuffe with a Twist!

Posted by Lindsey on January 22, 2019
Last week we treated ourselves to a trip to Stratford upon Avon and a visit to the Swan Theatre to watch Molière’s classic play Tartuffe. I have to say that the performance was something of a surprise, but a good surprise! Over our meal, before the play, we were chatting about big wigs and flamboyant costumes, as well as previous Molière plays we have seen....But no, this one was nothing like them!! 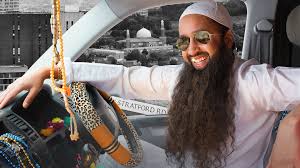 Instead the play was brought bang up to date in a brand new version by BAFTA and Emmy-Award winning writers, Anil Gupta and Richard Pinto (The Office, Goodness Gracious Me, The Kumars at No. 42). We weren't prepared for the production and because of Christmas, I hadn't even read any reviews.

The programme gave us the first hint that big wigs and flamboyant costumes weren't going to be much in evidence. "When director Iqbal Khan brings Molière's satirical play Tartuffe to the Swan Theatre this autumn, it'll have come a long way from the original French setting. Iqbal has transferred the play to Birmingham, into the community he himself grew up in."

But we still didn't know what was coming!!

"I’m a Brummie and born into a Pakistani Islamic family, so this feels like a very personal journey to undertake," says Iqbal. "I was excited by the potency of setting the play in a modern Islamic family and in a community under pressure, where religion is so problematically the thing that identifies them.

"For Molière’s satire to bite (and the jokes to hit!) the religious context has to have an appropriate intensity. There aren’t many other places better suited to the DNA of the play than Birmingham and the heterogenous Pakistani community thriving there." 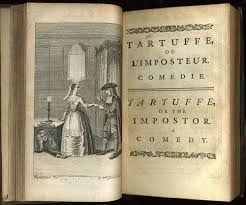 Well, this was certainly surprising, but goodness me (or goodness gracious me) it really worked and we were enthralled. It was a fabulous performance and, during the interval, everyone was talking about it.

Tartuffe has the gift of the gab. A spirituality. A certain aura about him….that comes only when you claim to have Allah on your side, hundreds of Twitter followers and access to the family’s bank account!

We enjoyed watching the lies and deceit unfold in this wickedly hilarious Brummy satire of faith, family and #fakingit and wondered "what would Molière make of this?" We decided that he would have loved it, as did we.