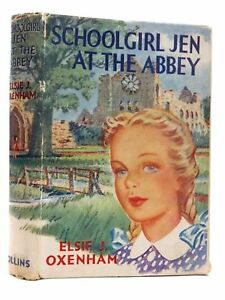 So, now I'm reading the seventh book in Oxenham's Abbey series and I'm starting to understand my earlier confusion with the books and why I didn't enjoy them, until now.

To start with the confusion over the lack of a school in the Abbey school novels. I was expecting the books to feature a school or be based around a school, and they aren't. Or at least not many of them are. I have only recently started to appreciate that the books focus on an Abbey, not an Abbey School!

Secondly, the order of the novels, the First and Second Generation titles and then the Retrospective titles. Very confusing. Even though Brent-Dyer's wrote many more Chalet School books than Oxenham wrote Abbey books, there was no attempt to categorise them into eras; they just flow, one from the other.

And finally, the endless treasure hunts and discoveries in the Abbey do make the books more akin to Blyton's Famous Five stories than Oxenham's contemporaries and peers.

I have yet to encounter the profusion of twins in the series! Apparently, Oxenham is famous for them. So far I have only encountered the twin brothers who are fathers of Joan and Joy, and they are long since dead and occur "off stage".

My final thought on the series so far, is the uncanny resemblance between Oxenham's Jen and Brent-Dyer's Mary-Lou. There are clear physical similarities, especially the long blond plaits, but there are also similarities in chararcter and attitudes. Interesting. I'm assuming Brent-Dyer "borrowed" from Oxenham or maybe they each influenced the other. I'll keep an eye on the character as I keep on reading!
Books