Last weekend we managed to get our much needed and long-planned trip to Angelsey. As planned we stayed at the Bull in Beaumaris and discovered a fabulous plant-based restaurant on the main street. We explored much of the island including some of the pretty coves, and mooched around Beaumaris and the harbour. It was very relaxing and excellent for clearing away the cobwebs!

On our second day we explored Caernafon Castle, which was amazing and just as large and well-preserved as I remembered it to be. Then we drove along the coast road, with spectacular views of the sea and the Great Orme, near Llandudno, towards Denbigh. Our first destination, however, was St Asaph whose claim to fame is being the second smallest city in Britain and home to the smallest cathedral.

St Kentigern built his Church here in AD560. When he returned to Strathclyde in AD573 he left Asaph as his successor. Since that time the Cathedral has been dedicated to Saint Asaph and the Diocese bears his name.

The present building was begun in the thirteenth century and is reputed to be the smallest ancient cathedral in Great Britain. It is the home of the William Morgan Bible and as such provides a vital link with Welsh culture and literature. 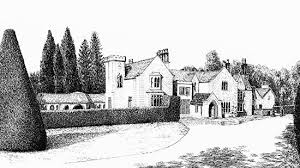 All this is excellent stuff and very interesting but, for me, the links with Felicia Hemans are even more interesting. Poet Felicia Hemans lived in St Asaph from 1809 to 1828, at Bronwylfa Hall near St Asaph, for most of that period.

Today Hemans is best remembered for her poem Casabianca ("the boy stood on the burning deck" etc) but she wrote far greater poetry and was, during her lifetime, nuch admired by William Wordsworth, Percy Bysshe Shelly and Walter Savage Landor. A not inconsiderable feat during a time when women writers were mostly overlooked and ignored.

It was said that she offered “a woman’s voice confiding a woman’s trials” while others saw "a lyricism apparently consonant with Victorian chauvinism and sentimentality". Whichever it is, and, as with most writing, there is probably a mixture of the two. Hemans was a much-read and admired poet,who loved and appreciated her Denbighshire home.

From St Asaph we carried onto Denbigh Castle which we explored thoroughly. I have a very soft spot for Denbigh as it is where I was born. I don't remember very much about the small town, we left when I was three, but I do remember walking through the Castle grounds very clearly. On this visit I was struck with Denbigh's similarity to Kendal, the auld grey town.

St Beuno’s, near Denbigh, was the Jesuit seminary where Gerard Manley Hopkins spent some of his happiest years.  It was to this corner of North Wales that he came in 1874 to spend three years studying theology at St Beuno's College in preparation for the priesthood. And it was here, too, that he wrote some of his finest poetry, including Pied Beauty, Spring, God's Grandeur, The Windhover and The Wreck of the Deutschland, a poem that spawned the most intensely creative period of his poetic life.


Hopkins relished his time here, and the Welsh language would have a profound effect upon his work; he explored Welsh poetic form and delighted particularly in "cynghanedd", a sound-arrangement that relies on repeated sounds and stresses - a characteristic of his own poetry. He is a wonderful poet, I love his poetry and particularly enjoy his connections with Denbigh.

Finally, my love of literary connections was satisfied with a visit to Brynbella. Brynbella is a modern garden incorporating a historic 18th century garden, set below a Palladian villa built by Mrs Thrale, a friend of Dr Johnson.

Hester Thrale was a Welsh diarist, author, and patron of the arts, and one of London society's most prominent 'bluestockings'. She was a close friend of Samuel Johnson, and her letters to Johnson are one of the best sources of information about his life. Johnson considered Mrs Thrale to be the only female intelligent enough to converse with! 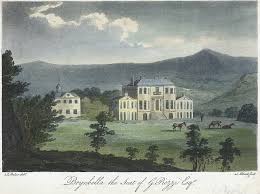 In 1763 Mrs Thrale married a wealthy brewer named Henry Thrale. With her husband's wealth to launch her into society she became a patron of the arts and counted playwright Oliver Goldsmith, Sir Joshua Reynolds, Edmund Burke, and author Fanny Burney among her friends.

When Henry Thrale died in 1781 her literary friends expected Hester to marry Johnson, but she surprised everyone by marrying Gabriel Piozzi, her daughter's music teacher. The match astonished London society, for not only was Piozzi poor, he was a Roman Catholic, and foreign. The couple had to retreat from the limelight, shunned in polite circles. Johnson cut off all ties with Mrs Thrale.
Books Places Poetry Ruins Walks