Ruskin, Turner and the Storm Cloud at Abbot Hall Gallery 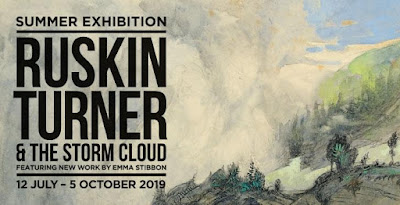 2019 is the bi-centenary of John Ruskin's birth and the year that I have, finally, fallen under his spell.

For years I wasn't interested in Ruskin's work, seeing him as a rather dry and dusty Victorian. But suddenly, this year, all that has changed. I think a lot of the reason for this change has been the number of excellent books which have been published, explaining his work and placing it in a current context which make it seen fresh and relevant.

One of these excellent books is Suzanne Fagence Cooper's "To See Clearly: Why Ruskin Matters". We enjoyed a talk given by Suzanne at the Theatre by the Lake, during Words by the Water, and promised ourselves a visit to York Art Gallery, to see the exhibition: Ruskin, Turner and the Storm Cloud. Unfortunately, events conspired against us, and we didn't get to York. So we were thrilled to discover the exhibition had moved to Abbot Hall in Kendal.

The exhibition is wonderful, it certainly lived up to expectation. Spread over six rooms there were dozens of original oil paintings, sketches and works of art. There was so much that we started to get artistic indigestion!

Curators at Abbot Hall described the exhibition thus: "Ruskin, Turner & the Storm Cloud will be one of our biggest shows ever. If you have an interest in Ruskin and Turner this is a must-see exhibition. This is a hugely significant year in celebrating Ruskin and we are delighted to have this landmark exhibition at Abbot Hall during the 200th anniversary of his birth. It’s particularly apt that the exhibition takes place in Cumbria - the home of Ruskin and the place he found most inspiration.”

The exhibition adds to the body of work which is re-evaluating Ruskin. Art historians, scientists, geographers, artists and curators are exploring Ruskin's lifelong commitment to the painted landscapes of JMW Turner and his own artistic ambitions, as well as his prophetic concerns about the world’s darkening skies, pollution and psychological turbulence. In 1884 John Ruskin spoke out against an encroaching “Storm Cloud”―a darkening of the skies that he attributed to the belching chimneys of the modern world.

So much of Ruskin's writing resonates with the world today, our concerns over climate change and global warming. Following a week of record temperatures across Europe, and even in the UK, Ruskin's concerns have more relevance and resonance than ever.
Books Poetry