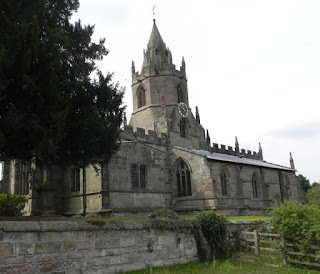 On our recent trip to Wightwick Manor we stumbled across the village of Tong and, more specifically, Tong Church.

St Bartholomew's Church has a glorious setting in the very pretty village of Tong and inside, it's difficult to move around due to the large number of tombs and effigies, paying tribute to families long since dead.

The church is sometimes called the “village Westminster Abbey” because of the large number of magnificent tombs it contains, mostly for the Vernon and Stanley families.

This is all very interesting but the exciting bit, for literature buffs like me, is the purported link between Tong Church and William Shakespeare.

At the head of Sir Thomas Stanley's tomb are the following lines of poetry: 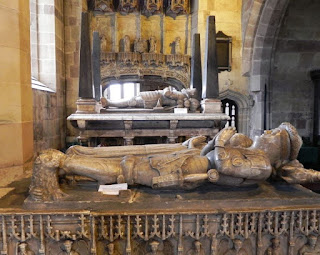 Ask who lyes heare but do not weep,
He is not dead he dooth but sleep
This stoney register, is for his bones
His fame is more perpetual than theise stones
And his own goodness with himself being gon
Shall lyve when earthlie monument is none.

And at the foot of the tomb the following lines:

Not monumental stone preserve our fame,
Nor sky aspiring pyramids our name
The memory of him for whom this stands
Shall outlive marbl, and defacers hands
When all to tymes consumption shall be geaven
Standly for whom this stands shall stand in Heaven.

It’s rumoured that these lines were written by Shakespeare for this tomb, and there are clear, documented links between Shakespeare and the Stanley family.  It seems quite amazing but then, we are fairly close to Stratford-upon-Avon, so it is possible, I suppose.

The legend of the church providing the inspiration for Charles Dickens' character Little Nell from The Old Curiosity Shop, is clearly spurious although it is thought that Charles Dickens visited Tong church. His grandmother is supposed to have worked at Tong Castle many years before as a girl.

The 'grave' is thought to have come about because Charles Dickens's novel was serialised and shipped over to America, and as a result, Americans began coming over to England to visit scenes featured in the book. The tourists recognised the references to Tong church from the book and came to view the supposed 'grave', which of course was not there.

However, a verger and village postmaster, George H. Boden apparently asked local people to pay for a headstone, forged an entry in the church register of burials (apparently the giveaway was that he used post office ink to do this), and charged people to see the 'grave'.

So, two fascinating stories and a beautiful church which was well worth a visit in its own right.
Books Poetry Ruins Walks