How to Read the Abbey Books

Posted by Lindsey on August 30, 2019
Having collected Elsie J Oxenham's Abbey books for years (and years), I have finally settled down to read my way through the series. 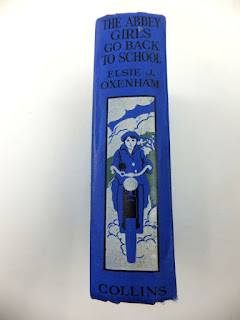 I wasn't too sure how to approach the series. Should I read the books in the order they were written or should I read them chronologically? Because the Abbey books were not published in 'reading order', reading the series according to the publishing dates, while interesting, does not give the story in chronological order according to "Abbey Time". Oxenham jumped around with the series, writing fill-ins when she wanted to expand on certain characters and expanding on certain periods of Abbey time.

I chose to read the books according to "Abbey Time". This means that I have read the first three books in the series, then moved onto the seven Retrospective titles, and am now reading book four in the series (as the books were written). Confusing, isn't it!! I thought this would work best, as this is how I would approach Elinor M Brent-Dyer's Chalet School books, if I were to start reading them from scratch today. This was the best comparison in my opinion.

I am discovering the pros and cons of my approach. The main positive is that the story of the Abbey Girls and their friends and families is unfolding chronologically; the main negative is the change in tone and style of the books written in different decades and eras. On balance, I think my approach is working for me, but I am very aware of the subtle differences, particularly in language, behaviour, dress, society and style in the books. 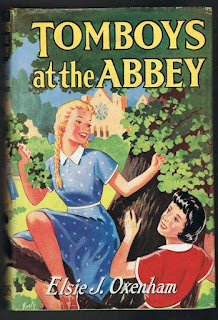 Oxenham started writing the Abbey books in 1914 (Girls of the Hamlet Club) and completed the First Generation Abbey books in 1938. The First Generation books, or the ones I have read to date, are clearly set between the two wars with many references which reflect this period.The seven Retrospective titles were written between 1938-1957 and reflect the social norms of the time. It is strange to travel back in time 35 years, which is the gap between Tomboys at the Abbey (1957) and The Abbey Girls Go Back to School (1922).

The dustwrappers of the books are so very different, featuring 1950's short dress clad girls and a 1920's modern Miss astride a motorbike (shocking!)The language is different and the characters are clearly more modern. Social norms from the 1920s, including early marriage and girls not pursuing careers are at odds with the attitude towards careers and marriage in the Retrospective titles.

I am finding the books interesting and enjoyable and feel that I am approaching the series in the way that works best for me. However, I have realised that, unlike the Chalet School fill-ins (written by different authors) and the main Chalet School series, Oxenham was writing in a more organic way, her style and tone changing as she grew older and changed attitudes and ideas. The authors of the Chalet School fill-ins are attempting to imitate the style and tone of the books which come just before and just after the book they are writing.

There are a couple more anomalies to come in the Abbey series but, from now on, it's pretty much plain sailing.
Books