Last weekend we finally returned to Wreay to explore the church and other buildings restored in the early 19th century by the Cumbrian born, Sarah Losh. We'd visited the village a few years ago, in the middle of winter. It was so cold then that we scarcely paused, but promised ourselves a return visit. Last weekend was the perfect time to make our return visit, a little later than we had intended!

Sarah was born in 1785 into a prominent Cumberland family who were acquainted with the movers and shakers of their day, from William Wordsworth to George Stephenson. She had remarkable talents and was ‘educated far beyond the reach of her own sex and indeed of most men.’ In 1815, along with her younger sister, Katharine, she went on the 'Grand Tour' of France, Germany and Italy where her interest in architecture was awakened.

Returning to Wreay Sarah found that the old church had fallen into into disrepair and stepped in, donating a piece of land and sufficient funds for the building of a new church on ‘condition that I should be left unrestricted as to the mode of building it.’ She also built a new dame school for the village and a new 'Free School' for the children of the poor as well as building a simple mortuary chapel for the village graveyard, with a sexton's cottage nearby. 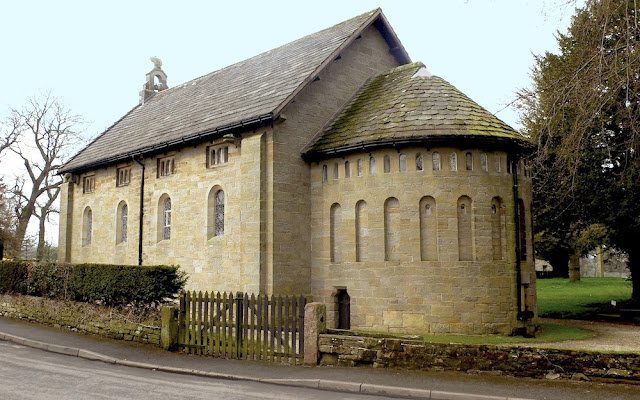 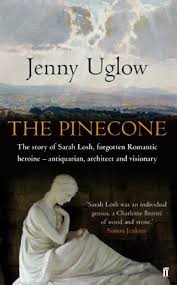 The larger project of the church, however, gave her much more scope for her creative impulses and energies, together with her antiquarian interests and love of the natural world. Paying for it out of her own pocket, she tackled every detail of its design herself, thinking it through into a coherent whole and thus realising in it 'the fruits of a carefully considered view of architecture and its relationship with society and religion' (Bullen 2010). In style, it provided an alternative to the Gothic, and is increasingly being recognised as a forerunner of the Byzantine Revival. But above all it expresses her personal vision of the 'progressive forms and types of sacred worship... from the earliest manifestations of the Judaic and Christian standards, down to the post-Reformation period' (Lonsdale, Cumberland Worthies 1873).


Built in the shape of an Italian basilica, the church is encrusted, inside and out, with rustic carvings of plants, figures, animals, insects and the recurrent pinecone. Sarah herself carved two alabaster candleholders, as well as the font. St Mary's Church is amazing, full of symbolism, especially the pinecone, arrows and roses.


Simon Jenkins, in England’s 1000 Best Churches wrote 'Sarah Losh was an individual genius, a Charlotte Bronte of wood and stone.' Jenny Uglow has written a wonderful book about Sarah Losh describing, in great detail, the buildings and Sarah's unique vision and connections. The book is part biography and part paean to a beautiful group of buildings.

On the church, Nikolaus Pevsner said 'What is best in church architecture during the years of Queen Victoria? The first building to call out… the church at Wreay.'

In many ways Losh anticipated the Arts and Crafts movement in employing local, sometimes quite untried artisans, and participating actively in the work herself. As Simon Jenkins points out, 'The Arts and Crafts Movement took half a century to catch up with her.'