The Box that Became a Cottage

Posted by Lindsey on August 03, 2019
I love the story of Ann Hicks, "the squatter in Hyde Park", who was removed to make way for Crystal Palace and the Great Exhibition.

I first discovered this story in my Girls Own Annual and found the story applies so often in everyday life that it has stuck with me. When someone is being acquisitive or taking more than they are entitled to, I always say this is a box that became a cottage situation! Chris always knows what I mean.

In the Annual, Reverend Stuart Robertson writes that Ann Hicks was "a marvel of pertinacity, perseverance, persistence, and everything beginning with "per" right down to perjury. She is not only a woman: she is a parable, a tract - in fact, a prodigy and a portent."

When informed that she had to leave the Park, she would not go easily. Instead, she wrote to The Times to appeal for public aid, as "I have many foes." For years, Mrs. Hicks had lived in the Park, making a few pence selling fruits and drinks. At first, she had refused to make way for the Exhibition. The Duke of Wellington himself, Her Majesty's Ranger of the Parks, had ridden over to her "home" near the Serpentine and promised her the grand sum of five shillings a week for a year in compensation. When the money proved inadequate, Mrs. Hicks re-appeared in the Park, purveying ginger-beer to the parched.

Mrs. Hicks had become a celebrity. "A Stroller in the Park" wrote The Times to insist "Anne Hicks is part of Hyde Park." Col. Charles Sibthorp MP, the gadfly critic of the Exhibition, took up her case in the House. He calls the treatment of Mrs. Hicks a "gross act of cruelty." Mrs. Hicks made the claim - albeit just recently - that her grandfather had actually rescued the future King George II from the Serpentine back in 1733. As a result, a grateful monarch had granted her family life tenancy in the Park.

Lord Seymour answers for the Government, laughing off the Royal anecdote and arguing that her cottage was an impermissible encroachment, "however virtuous or excellent." The Commons quickly moves on to other business and Mrs. Hicks is soon forgotten. A public fund, however, brought in enough contributions to afford Mrs. Hicks transit to Australia to join her son.

For one of only a few moments in his long life, the great Wellington found himself in bad odor. His role in the eviction of the poor woman - while his great mansion, Apsley House, stood undisturbed in the very same park - was not without its irony. The hitherto unknown North London Anti-Enclosure Society wrote him demanding an explanation. The Duke's secretary sent a haughty reply. "The Duke purchased from the Crown his property in Piccadilly; Mrs. Hicks is neither more nor-less than a squatter." The Society was also informed that His Grace declined to continue "any epistolary correspondence."

PUNCH summed up the matter in pithy doggerel:

Moral of the story:
To titled Rangers large amends
Impartial Justice makes,
But little to the dame that vends
Poor ginger-pop and cakes.

Stuart Robertson tells the story so beautifully, it has stayed with me, in his form, for many years: 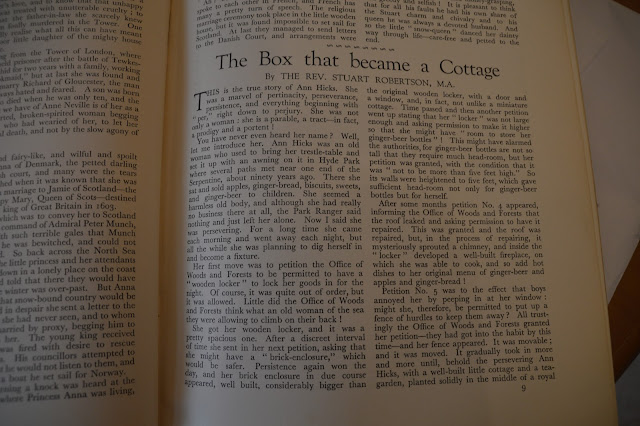