Posted by Lindsey on August 01, 2019
Last weekend saw the Gilbert and Sullivan Festival open in Buxton. In spite of the inclement weather, we managed to enjoy two operas: The Pirates of Penzance and The Gondoliers. Both were performed by the G&S Opera Company and both were fabulous. 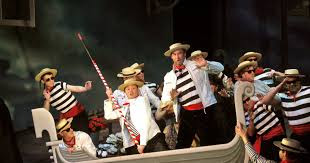 There's nothing much to post about the performances, as ever they were sparkling and polished. But I did think quite a lot about Gilbertian satire, as I sat and reveled in the music, singing and lyrics. In all the operas Gilbert pokes gentle fun at institutions and innovations and ideas. Setting his operas in far flung places he is able to extend his satire to the establishment, monarchy and the House of Lords. All excellent stuff. I have to admit that I love the fact that a lot of the audience think G&S is truly "conservative", with a small "c", whilst the reality is that the operas are actually rather subversive!

The Gondoliers and Pirates are two of my favourite operas and I love the gentle satire. In The Gondoliers Gilbert explores communism and socialism and the cast sing the famous lines "If everybody's somebody, then no-one's anybody". This always reminds me of Arthur Scargill's famous comment "I won't be happy until everyone earns above the average"!

The libretto also reflects Gilbert's fascination with the "Stock Company Act", highlighting the absurd convergence of natural persons and legal entities, which plays an even larger part in the next opera, Utopia Limited. As in several of their earlier operas, by setting the work comfortably far away from England, Gilbert was emboldened to direct sharper criticism at the nobility and the institution of the monarchy itself.

The end is easily foretold,
When every blessed thing you hold
Is made of silver, or of gold,
You long for simple pewter.
When you have nothing else to wear
But cloth of gold and satins rare,
For cloth of gold you cease to care—
Up goes the price of shoddy.
In short, whoever you may be,
To this conclusion you'll agree,
When everyone is somebody,
Then no one's anybody! 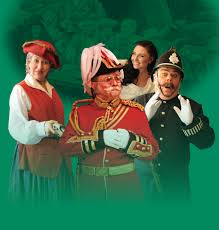 Some of the interesting themes of Pirates include the Victorian passion for ruins, with Major-General Stanley sitting in the ruins of the "ancestral chapel" musing on his fate. He points out that, having falsely described himself as an orphan to escape the pirates' clutches, he comes to the chapel, night after night, to humble himself before the tombs of his ancestors by purchase!

Gilbert also lampoons the police and the military, poking fun at empty patriotism and, above all, satirizing the stupidity of a literal devotion to duty. Our hero Frederic is “the slave of duty,” personifying the operetta’s subtitle. In Victorian England, with an Empire stretching around the globe, protected by the most powerful naval fleet that ever existed, Pirates of Penzance was social satire with a sharp edge.

That Gilbert’s lyrics and Sullivan’s music does all this with such a light touch – tuneful, infinitely clever, unexpectedly warm – is the stuff of genius.