Posted by Lindsey on September 27, 2019
We had a lovely few days in Somerset exploring churches, Cleeve Abbey and Nether Stowey. I have long wanted to visit Nether Stowey and enjoy the connections with the Romantic poets, Samuel Taylor Coleridge, Robert Southey, and William and Dorothy Wordsworth. 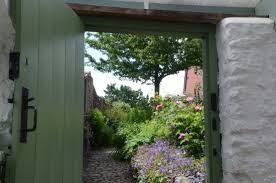 Samuel Taylor Coleridge moved to Nether Stowey with his wife Sara and their three-month-old son Hartley on the last day of 1796. Coleridge was 24. He stayed there for just three years, but they were, probably, the happiest, most fulfilling, and poetically productive of his life.

It was in the cottage on Lime Street in Nether Stowey that Coleridge wrote some of his most wonderful poetry and whilst wandering the Quantock Hills, Coleridge, Robert Southey and the Wordsworths conceived and developed their plan for Pantisocracy. Pantisocracy was a Utopian scheme devised for an egalitarian community and a system of government where all rule equally.

Wordsworth and Coleridge began to create Lyrical Ballads, a collection of poetry which is considered to mark the beginning of the Romantic literary movement. With the freedom to walk, to write, and to socialise, Coleridge had the perfect conditions to produce some incredible poetry.

The Rime of the Ancient Mariner, the dark tale about a doomed sailor who shot an albatross and was cursed by demons, is believed to be inspired by nearby Watchet harbour. Kubla Khan, the product of laudanum-soaked dreams, was famously interrupted by a “person from Porlock”, and Frost at Midnight beautifully describes the interior of the Cottage in Nether Stowey on a cold winter’s night, with frost creeping patterns over the window pane. This Lime Tree Bower was composed after Sara had spilled a pan of boiling water over Coleridge's leg, and he was imprisoned in the lime tree bower, whilst his friends walked the Quantock Hills.

Well, they are gone, and here must I remain,
This lime-tree bower my prison! I have lost
Beauties and feelings, such as would have been
Most sweet to my remembrance even when age
Had dimm'd mine eyes to blindness!
They, meanwhile,
Friends, whom I never more may meet again,
On springy heath, along the hill-top edge,
Wander in gladness...

We sat beneath the bower in the cottage garden and listened to a reading of the poem, it was so beautiful and peaceful. Having visited Dove Cottage in Grasmere so often, we thought that Nether Stowey was very understated and gentle and a wonderful way to spend a few quiet hours.
Books Places Poetry Walks