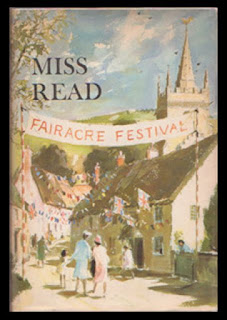 The weather forecast looks pretty awful for much of the UK tonight, although we seem to be on the edge of the worst of the weather. Thank goodness! The weather reminds me of one of my favourite Miss Read novels: Fairacre Festival.

In Fairacre Festival the first day of October brings an unheralded and violent storm, which whips through Fairacre, blowing down trees and telephone poles - and, worst of all, damaging the roof of St. Patrick’s Church. The inhabitants of Fairacre can’t imagine how they will be able to afford the repairs, until Mr. Willett suggests a fundraising festival. Preparations for a food sale, a concert, a school play, and a gigantic Christmas bazaar are soon made - but will they be enough? With her customary humor and grace, Miss Read recounts a story of catastrophe and courage.

“On the first night  of October a mighty wind arose and smote the countryside  Fairacre. The violence of that wild night took almost all by surprise. Only the exceptionally weather-wise had any inkling of the devastation which lay in store, and even they admitted, as they surveyed the wreckage the next morning, that it was "a durn sight worse'n they'd thought it would be".