Posted by Lindsey on October 26, 2019
We were lucky to get tickets to see Andrew Hill talking about his book Ruskinland, at Borderlines in Carlisle. The central question of Ruskinland is, "is Ruskin relevant today?" Andrew Hill certainly believes that he is and this book is all about why we need Ruskin now, in 2019, with all the problems and issues which we are facing.

Ruskin provided commentary on environmental issues, art, geology, geography, society economics and Andrew Hill talked about all of these diverse aspects of the critic's life. 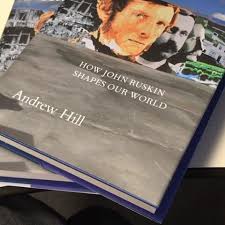 As 2019 marks the 200th anniversary of Ruskin's birth there are many exhibitions, books and articles documenting the range of his interests, from art and geology to social criticism and ecology. Both halves of Ruskin's career as art critic and social commentator radiate from his intense aestheticism which saw beauty as central to a society and its well being.

Yet it’s the thesis of this book that we may not know Ruskin but we’re living, one way and another, in his world. His ideas about architectural and landscape conservation gave us the National Trust; his warnings of the environmental damage caused by industrial emissions anticipate modern green politics; his jeremiad against the ‘illth’ of unchecked capitalism in Unto This Last was influential in ideas about social democracy and the emergence of the 20th-century welfare state; as was his emphasis on the dignity of labour. He’s even claimed here for mindfulness, our growing interest in local provenance, and in so-called holistic approaches to living.

We thoroughly enjoyed listening to Andrew Hill speaking so passionately about Ruskin and his relevance for today.

The questions were thought-provoking and we left feeling that we'd added to our knowledge of John Ruskin and how he has influenced so many aspects of our modern world.
Books Poetry