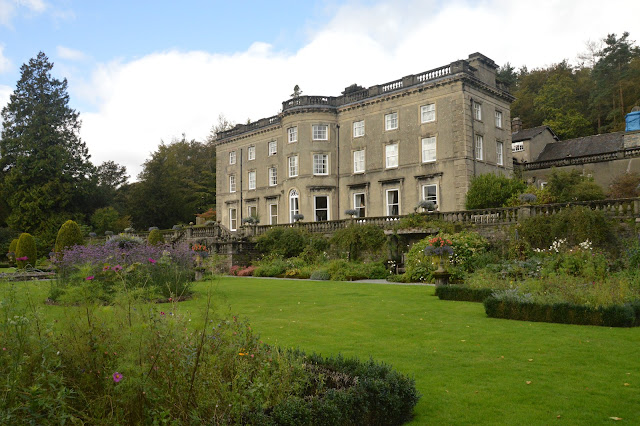 Last weekend we spent a couple of hours at Rydal Hall. This beautiful house was well known to William Wordsworth and his family as it is opposite the poet's final home, Rydal Mount. Wordsworth rented Rydal Mount from Lady Fleming, the owner of Rydal Hall. Today the Hall is in the ownership of the Diocese of Carlisle and plays host to retreats, conferences and holiday accommodation.

Rydal Hall is a Grade 2* listed building and is very attractive, but it is the gardens which are wonderful and well worth visiting. In the mid-17th century, Sir Daniel Fleming developed the landscape as an early Picturesque garden incorporating Rydal Beck and its natural waterfalls. "The Grot", designed in the Picturesque style, is a summerhouse designed for viewing the waterfall and became a major attraction for a succession of writers and artists including Turner, Gilpin and Wordsworth.

The formal gardens in front of the house were designed in 1909 by Thomas Hayton Mawson, and are an excellent example of the Arts and Crafts garden.

Then, while I wandered where the huddling rill
Brightens with water-breaks the hollow ghyll
As by enchantment, an obscure retreat
Opened at once, and stayed my devious feet.
While thick above the rill the branches close,
In rocky basin its wild waves repose,
Inverted shrubs, and moss of gloomy green,
Cling from the rocks, with pale wood-weeds between;
And its own twilight softens the whole scene,
Save where aloft the subtle sunbeams shine
On withered briars that o'er the crags recline;
Save where, with sparkling foam, a small cascade
Illumines, from within, the leafy shade;
Beyond, along the vista of the brook,
Where antique roots its bustling course o'erlook,
The eye reposes on a secret bridge...

Towards the end of the poet's life his nephew Christopher Wordsworth went with him to "The Grot". The following is a description of their walk together from Rydal Mount.

"He accompanied me to the gate and then said if I had a few minutes longer to spare he would like to show me the waterfall which was close by – the lower fall of Rydal. I gladly assented and he led the way across the grounds of Lady Fleming (Rydal Hall) which were opposite to his own to a small summer-house. The moment we opened the door the waterfall was before us. The summer house being so placed as to occupy the exact spot from which it was to be seen. The rocks and shrubbery around closing it in on every side. The effect was magical. The view from the rustic house, the rocky basin into which the water fell and the deep shade in which the whole was enveloped, made it a lovely scene. Wordsworth seemed to have much pleasure in exhibiting this beautiful retreat."
Books Garden Places Poetry Walks