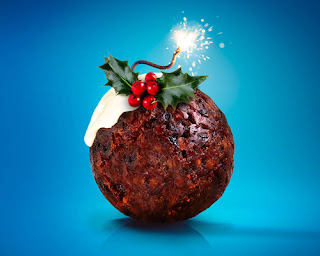 Yesterday evening we enjoyed a production of Alan Ayckbourn's wonderful Season's Greetings at the Old Laundry Theatre, in Bowness-on-Windermere.

Every year the Old Laundry Theatre hosts a Stephen Joseph Theatre production of an Alan Ayckbourn play. This year, they are showing two plays: Season's Greetings and Birthday's Past, Birthday's Present. We have booked to see both performances.

Last night we laughed and chuckled our way through the first performance, Season's Greetings. It was fabulous! The play was written in 1980 and transports us back to a 1979 family Christmas. When families get together to celebrate a special occasion, there’s a danger that all hell will break loose. Particularly if they happen to be trapped for several days with all their relatives and copious amounts of alcohol…

Neville and Belinda are hosting their extended family over a long weekend. The presence of two tyrannical uncles – Bernard, whose ham-fisted annual puppet shows are a source of dread to young and old alike, and TV addict Harvey – promises to stir up trouble from the start and that’s before you add to the mix broken toys, creaking marriages and guest novelist Clive, whose relationship with Belinda’s sister Rachel is going nowhere, causing him to look for love elsewhere.

Season's Greetings was directed by Alan Ayckbourn and he was sitting in the audience. The Stephen Joseph Theatre cast was as polished and sparkling as usual.

The Independent's review captured the spirit of the play "mordantly hilarious… a classic of drunken disasters and misrouted passions".

We had a fabulous evening and are already looking forward to the next play in a couple of weeks.
Theatre