Harriet Martineau at The Knoll, Ambleside 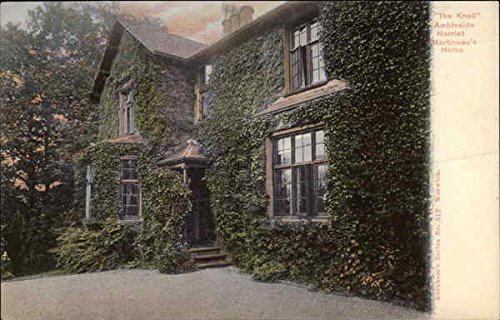 Last week we sneaked a day off and spent it in Rydal and Ambleside. A walk from Rydal Hall was our first destination, followed by lunch in the café overlooking the waterfall, and then into Ambleside.

I've been keen to visit the Knoll, the Ambleside home of Harriet Martineau, novelist, political economist, social reformer and feminist, for quite a while. The house is now in private ownership, but can be viewed from the carpark behind the institute where Martineau lectured and where she is remembered with a blue plaque. 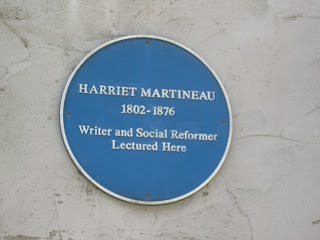 Harriet Martineau was a Victorian polymath. She wrote novels, the most important being Deerbrook; she lectured on politics and economics; campaigned for social and political reform and travel books. She shot to fame in 1832 as author of Illustrations of Political Economy – twenty-five short stories showing how economic conditions impacted on the lives of ordinary people in a variety of social environments. She visited America in 1834 for two years and identified with the anti-slavery cause, which she promoted in her journalism for the rest of her working life. 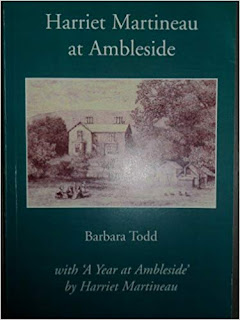 The Knoll is situated opposite Charlotte Mason College (now part of the University of Cumbria) and close to the Armitt Museum.  The Knoll was commissioned by Harriet Martineau in 1847 when she came to Ambleside to convalesce. In Ambleside she found a different world. "The mountains, by their conservative influence," she says, "have here hedged in a piece of old English life, such as is to be found nowhere else within the island." At Ambleside she wrote her Guide to the Lake District, following in the footsteps of her friend William Wordsworth. Her Guide supplied the tourist with all the information needed to make a successful tour of the countryside.

Her daily walks and excursions reveal new delights and she writes about what she saw with the enthusiasm of someone who has found their paradise. But there was much to attract her. The scenery drew forth ecstatic descriptions from her: " the stream , the Stock, goes leaping, gurgling and gushing down, overhung by trees and tormented by rocks in its channel, till it passes under the road."

When she decided to make her home here, she advisedly chose a site on a knoll, a small hillock near the river with commanding views across the valley. Harriet designed The Knoll, employing local tradesmen to create what her friend Wordsworth described as being "the wisest step of her life, for the value of the property will be doubled in ten years".  Harriet began the most productive writing years of her life in Ambleside, inspired by the beautiful views from The Knoll and by the visitors that attended, established writers themselves. Harriet often entertained her companions by holding annual tea and dinner parties and each guest would plant two trees in the grounds. The gardens are now resplendent with firs and other species planted by, amongst others, Wordsworth, Coleridge and the Bronte sisters.

Ambleside has changed a great deal since the days of Martineau and her contemporaries, but there is still such a lot to enjoy and so much wonderful scenery, at which to marvel. We had a thoroughly enjoyable day.
Books Garden Places Poetry Walks