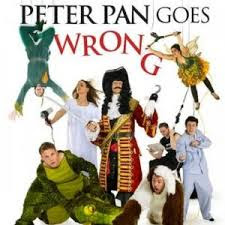 Last week we had a wonderful evening at the Lowry Theatre watching Peter Pan Goes Wrong. Having seen The Play that Goes Wrong a few years ago, we were prepared for the shenanigans on stage, but this was even better than expected.

The premise, as in The Play That Goes Wrong, is that the actors and crews are members of the fictitious Cornley Polytechnic Drama Society presenting their production of the J.M. Barrie classic Peter Pan, and ruin it through amateurism and personal rivalries.

The cast of Mischief Theatre was amazing. Split second timing and stunts galore, made the action on stage mesmerising. We were all hooked from the moment the play started. Well, we were hooked as soon as we took our seats, as the cast moved among the audience, fixing cables and organising the set, with catastrophic results, obviously! 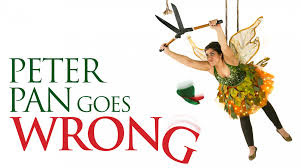 What a fabulous evening and it feels like Christmas has now begun.
Theatre