Posted by Chris on January 25, 2020
Robotic vacuum cleaners have been getting steadily better and cheaper since they first appeared about 20 years ago and today there are several models which do a good job for a reasonable price. So last year we bought a Eufy 11S Robovac which had received good reviews and was on an Amazon promotion. We were cautious but reasoned that the purchase was low-risk: if the device was a disappointment we could use Amazon's excellent returns service. 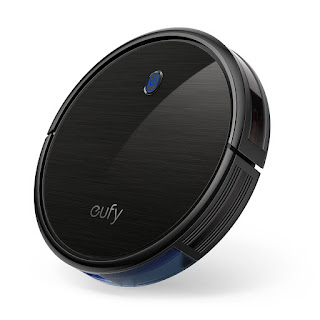 The Eufy is quite simple by today's standards. In particular, it doesn't connect to wifi and isn't controlled by an app. In fact it has no 'connectivity' at all, relying instead on a so-called bounce algorithm to find its way around the house. Whilst this means it is less sophisticated than other robovacs, it also makes operation easier and less prone to problems.

Infrared sensors and sensitive bumpers ensure that it bounces off walls and guides itself around objects. Clever sensors also ensure it doesn't throw itself down the stairs. There is a simple scheduling feature so the Eufy can be set to start cleaning at the same time each day. We use this to start the Eufy while we are at work. When we return it has done the day's cleaning and returned to its charging station.

Having tried the Eufy for several months we are confident it was a good choice. It cleans both carpet and tiled floors well and because it is more diligent than a human operator it hoovers for longer and reaches areas that we would often miss. Being less than three inches high it can get under furniture where conventional vacuums cannot. 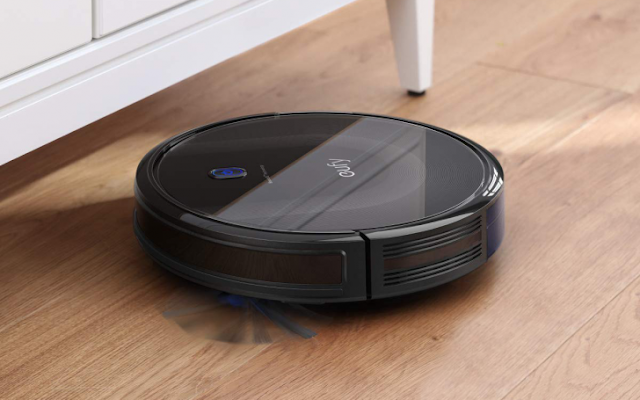 It has strong suction yet is very quiet in operation. For the first week or two of operation the 0.6 litre bin quickly filled up with carpet fluff, proving that the Eufy was reaching areas that we hadn't often reached with conventional hoovering.

The results were striking. In particular, before buying the Eufy we had been on the verge of shampooing our hall carpet which was getting a little grubby. After a week or two of intense, deep cleaning by the Eufy we realised that there was no need for shampoo after all.

A simple but very effective robovac. In fact we were so impressed we bought a second one so we now have once on each floor.
Technology