Norman Nicholson - 'And the Rock is Alive in Our Bone’ 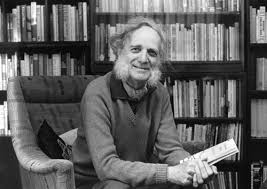 The University of Cumbria is offering a series of talks on "Negotiating a Cultural Landscape: Writers and Artists in the Lakes".

We have chosen a number of different talks over the coming months, and the first of these was Professor Andrew Gibson from Royal Holloway, at the University of London, on Norman Nicholson. His talk was titled 'And the Rock is Alive in Our Bone’: History and Geology in Norman Nicholson’s Prose and Poetry of the Cumbrian Coast.

It was an interesting lecture; it wasn't a talk and, in many ways I was back in my university days, listening to an academic lecturing on a rather dry subject!

However, the subject matter was fascinating, and has certainly given me food for thought, but the actual talk was rather inaccessible! I was hoping for more Norman Nicholson, and more poetry and less geology; especially as Prof Gibson (in his own words) has very little expertise in geology; and me, even less!

As he cantered through rocks and geology, comparing the layers to a licquorice allsort, I was struggling to grasp the relevance. Although I did rather enjoy the neat comparison. I did very much enjoy the concept of taking a train journey along the Cumbria coast, from Carnforth to Carlisle and witnessing the changes in the rocks and geology. I really wished that this had been developed further.

However, the lecture has caused me to read more about Nicholson and geology. He revealed a passion for the geology of the Lake District. ‘In no other part of England,’ he wrote, ‘has the life and character of a district and its people been so controlled by the nature of the rock and by the forces which acted upon it’. He went even further; ‘ to look at the scenery of Cumberland and Westmorland without trying to understand the rock is like listening to poetry in an unknown language – you hear the beauty of the sounds, but you miss the meaning. For the meaning is the rock.’

This geological understanding of Nicholson's comes though in many of his poems. In The Pot Geranium (1954) there is a sequence of poems, ‘The Seven Rocks’. You only have to have a mental image of the geological map of Cumbria to appreciate these: Skiddaw Slate, Scafell Ash, Coniston Flag, Eskdale Granite, Mountain Limestone, Maryport Coal and St Bees Sandstone. 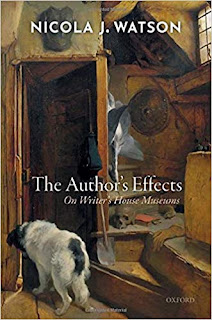 Therefore hope
is a theological virtue
And a geological grace,
Felt in the why
And wherefore of a rose,
And when rocks solidify
And the watching sky
Knows the fire’s purpose
And the way the water flows’.
(from Scafell Ash)

It's always good to listen to an expert, and simply enjoy being amongst fellow Nicholson aficionados. The Norman Nicholson Society was out in force, and reminded me to look at their website. I am very glad that I did, as they are promoting a fascinating new book by Nicola J Watson: The Author's Effects.
Books Poetry