Words by the Water - Literature and Landscape (and Art)

Posted by Lindsey on March 16, 2020
On Sunday we had tickets for Stephen Siddall, speaking about Literature and Landscape at Words by the Water in Keswick. Every year we book a couple of talks at this excellent festival; this year we have managed just one talk. But it was very interesting and thought-provoking.

Stephen Siddall decided to extend the title of his talk to include art in the title, and this gave him the opportunity to discuss famous paintings, in the context of poetry and the Lake District. In Landscape and Literature he explores the different ways in which landscape has been represented in literature and focuses on the importance of the pastoral; the contrasts between city and country, eighteenth-century developments from neo-classical to picturesque and Romantic ideas of the sublime. In the text Siddall continues the theme into the Nineteenth and Twentieth centuries, but in the talk he focused on the earlier period up to the late Romantic poets.

He started his talk with one of the most famous paintings of the Romantic period: The Wanderer above the Sea of Fog, 1818 by Caspar David Friedrich. 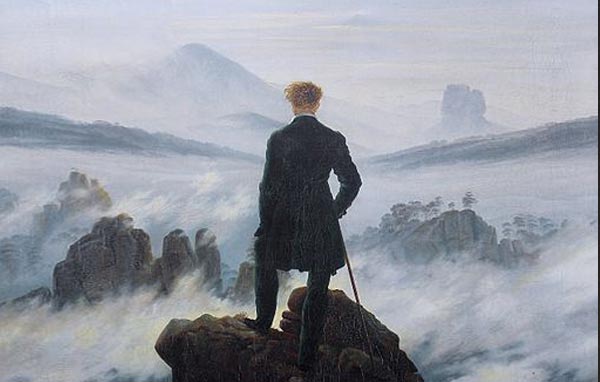 Friedrich wrote:  “The artist should not only paint what he sees before him, but also what he sees within him. If, however, he sees nothing within him, then he should also omit to paint that which he sees before him”. Stephen Siddall talked about the painting and Wordsworth, writing poetry about the within compared with the beyond. Again Friedrich writes: “when a landscape is covered in fog, it appears larger more sublime, and heightens the strength of the imagination and excites expectation…..The eye and fantasy feel themselves more attracted to the hazy distance than to that which lies near and distinct before us”. The sublime, as originally described by Edmund Burke, is at the centre of Romantic poetry.

During the hour long talk, Siddall covered Coleridge's loathing of the Age of Reason or the Augustans, and his love of wildness, solitude and imagination; the importance of the town versus the country in Romantic literature and the role of heroism, liberty and radical politics to all the Romantic poets from Wordsworth through to Byron.


We thoroughly enjoyed the talk, Siddall discussed the importance of Wordsworth's Lines Composed a Few Miles Above Tintern Abbey and the exploration of the inner and outer landscape. William Havell's Tintern Abbey was chosen as the painting to illustrate this poem: 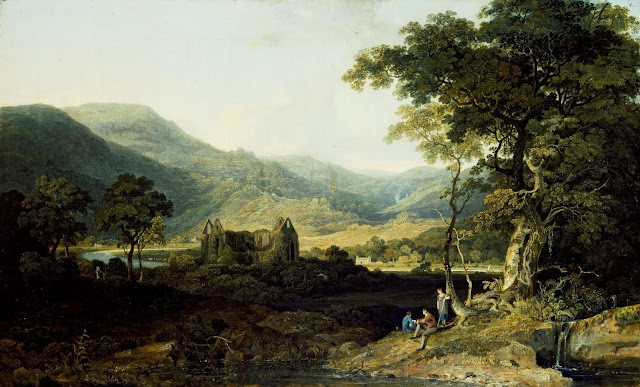 These beauteous forms,
Through a long absence, have not been to me
As is a landscape to a blind man's eye:
But oft, in lonely rooms, and 'mid the din
Of towns and cities, I have owed to them,
In hours of weariness, sensations sweet,
Felt in the blood, and felt along the heart;
And passing even into my purer mind
With tranquil restoration....

A very enjoyable afternoon which was interesting and thought-provoking.
Books Places Poetry