Posted by Lindsey on April 12, 2020
2020 is the 100th anniversary of the death of Canon Hardwicke Rawnsley. Rawnsley died at Allan Bank in Grasmere in 1920. He was one of the founders of the National Trust and a huge champion of preserving the Lake District. 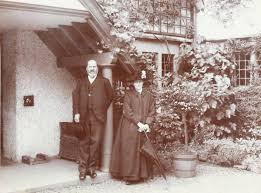 Throughout his life, Rawnsley composed hundreds of sonnets. Initially he was inspired by Charles Turner Tennyson, Alfred Lord Tennyson's brother, to embrace the sonnet form and he went on to use the sonnet to describe the beauties of the world around him, especially the Lake District.

Nature’s Gospel from Sonnets at the English Lakes is a conservation manifesto for the Lake District. It is a clarion call to his readers as to why such beautiful surroundings are so important:

When weary of the stilling city’s hum,
I seek the quiet of the hills and dales,
I do rejoice to know the man that ails
In heart, or hope, or head, may hither come,
And here may learn how Nature, seeming dumb,
Can soothe where life’s tumultuous current fails—
Here find the still communion that avails
To fire imagination almost numb.

He was championing the view that the Lake District was not only beautiful, but that it is unique and special. It was a gift from God, and had so much to offer all those who came to it, if only they would seek out such treasures. This was a land that had to be preserved in all its glory.

In A Book of Bristol Sonnets and Sonnets at the English Lakes Rawnsley lays bare his conservationist credentials. He uses his poetic energies to stress that the past is a living entity that is inextricably bound with the present and should be preserved. Above all, the Lake District is God’s gift to mankind that belongs to everyone.

There is much about Rawnsley's work that strikes a chord today, as we are concerned about preserving the beauty of the Lake District whilst making the countryside available to as many people as possible. Another of Rawnsley's wonderful sonnets concerns trippers on Good Friday. Now this year, this hasn't been a problem, but it's interesting to think that over hundred years ago Rawnsley wrote:

I feel
Indignant, hearing some cheap buffet song,
Or bursts of flashy music, borne along
Above the waters round the crowded keel.

Sadly, our current situation means that many of the Rawnsley events that were planned for 2020 will be cancelled, but I will be reading his sonnets as well as his many prose works over the coming months.
Books Places Poetry