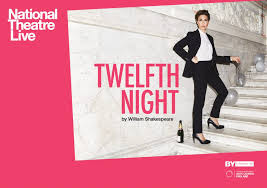 Yesterday was William Shakespeare's birthday, and to celebrate we watched the National Theatre's production of Twelfth Night, streamed into our living room.

This seemed a fitting way to celebrate the great man's birthday, during these strange times. Whilst we would have preferred a live theatre production, we are very much enjoying the theatre streaming that many theatre companies are offering at the moment.

This NT production of Twelfth Night is excellent. It's always been one of my favourite Shakespeare plays, and the very first one I ever saw performed. My first Twelfth Night performance was at the Royal Exchange in Manchester and performed in the round. It was an eye-opener for me and certainly helped me fall in love with the theatre. As with the current National Theatre's adaptation, Malvolio had a stand-out performance. I remember being somewhat puzzled that he came onto the stage on a bicycle! The National Theatre's performance is similarly topsy-turvy, with Malvolio played by a woman, and Feste also played by a woman.

So, we raised a glass to the Bard and toasted the great man's birthday. Somethings are constant, even during the strangest of times. As we're struggling with "lockdown" I'm thinking that Shakespeare used his time in quarantine from the plague, to write King Lear, maybe it's not so bad after all.
Books Poetry Strange times Theatre