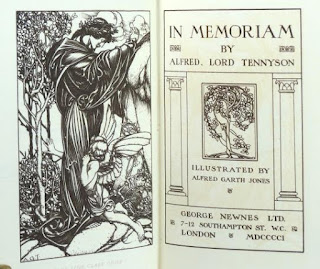 Alfred, Lord Tennyson's poem In Memoriam AHH was published on 1st June 1850. It is a requiem for the poet's beloved Cambridge friend Arthur Henry Hallam, who died suddenly of a cerebral haemorrhage in Vienna in 1833, aged 22.

Forgive my grief for one removed,
Thy creature, whom I found so fair.
I trust he lives in thee, and there
I find him worthier to be loved.

It's a glorious poem which was widely considered to be one of the greatest poems of the 19th century. Queen Victoria read the poem many times, as she grieved for her husband, Prince Albert.

The original title of the poem was The Way of the Soul, and this gives an idea of how the poem is an account of all Tennyson's thoughts and emotions as he grieves over the death of a close friend. He views the cruelty of nature and mortality, in light of science and faith. It's a long poem which Tennyson wrote over many years, which he changed and crafted many times.

In Memoriam explores the nature of grief and bereavement and the individual's relationship with God, whilst providing an exposition of the reconsiderations of faith and the world in the mid-nineteenth century.

Through the poem Tennyson uses individual bereavement to grapple with broader questions of faith, meaning and nature.

There are some wonderful stanzas in the poem and this is one of my standout stanzas:

Our little systems have their day;
They have their day and cease to be:
They are but broken lights of thee,
And thou, O Lord, art more than they.

A beautiful poem which was created out of grief and love.
Books Poetry