Posted by Lindsey on June 22, 2020
One of the more pleasant aspects of Lockdown and COVD-19 has been the number of literary festivals which have gone online. First off the blocks was the Hay Festival. They moved all of their events online and delivered some excellent talks. There were some initial technical hitches, as well as the strangeness of watching contributors speaking from their bedrooms and studies. On a very prosaic note, it took a while to get used to the speakers looking so scruffy and unkempt! On the plus side, it was delightful to snoop at their bookshelves!

The performance was led by a stellar cast reading work that included Intimations of Immortality, Daffodils, Lines Composed Upon Westminster Bridge and Above Tintern Abbey, The Prelude and We Are Seven. It was hosted and introduced by Shahidha Bari with readings by Simon Armitage, Margaret Atwood, Stephen Fry, Toby Jones, Jonathan Pryce and Vanessa Redgrave amongst others. Some of the readings were a bit strange, we were mesmerised by wild hair, strange facial hair and odd headphones. I know these shouldn't have detracted from the readings, but they did! 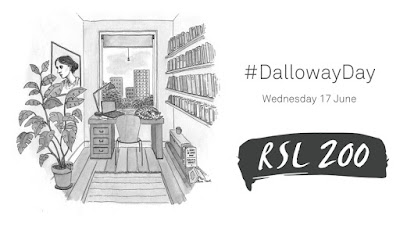 Next up was the Royal Society of Literature's Dalloway Day. Every year in the middle of June, the RSL celebrates the work and legacy of Virginia Woolf and Mrs Dalloway's Day. The full-day programme, 97 years after the Wednesday of Clarissa Dalloway’s party, explores the relevance of Woolf’s work in lockdown, and investigates what her words still do to challenge and interrogate attitudes to class, race, mental health and sexuality.

We enjoyed a panel discussion, delivered for the first time over Zoom, hosted by Emily Temple, with authors Rowan Hisayo Buchanan and Kate Young. They explored the quotidian pleasures we’ve developed appreciation for since lockdown, how literature can support us in these confusing times, and how this experience compares to Clarissa Dalloway’s own cerebral journey.

Clarissa Dalloway spends a Wednesday in mid-June 1923 wandering through Bloomsbury, buying flowers, and preparing for a dinner party. To many of her contemporaries, this represented a freedom they could only hope for – due to inequalities of class, gender and race.

There are more festivals and events to come and I'm sure we'll explore them. Online talks aren't the same as the "real thing" but they're a very welcome substitute.
Books Poetry Strange times