As Twelfth Night approached Chris and I were feeling sad that we would have to take down our external lights. The Christmas fairy lights felt like beacons of light in a very dark time, and it seemed such a shame to have to remove them.

Then we stumbled across a post on the English Heritage blog which said "leave your Christmas decorations up until February". We jumped at the idea. Fortunately, our lovely neighbours had read the same article and had decided to leave their lights up, too. 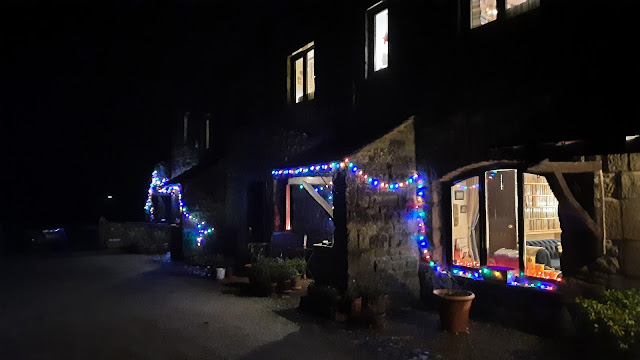 "After an especially tough year, we are encouraging the public to do as their medieval ancestors did and leave up their festive adornments until Candlemas on 2nd February. This opposes the theory that leaving decorations up beyond Twelfth Night is bad luck, which is a modern take on the tradition."

Candlemas (or the Feast of the Purification of the Blessed Virgin Mary) falls exactly 40 days after Christmas and is observed as the official end of Christmas in medieval England. The date was a great feast day and is so-called because candles intended to be used in churches in the coming year would be blessed on that day. There were also candlelit processions in honour of the feast.

Even today, cribs and decorations, remain in many churches until Candlemas, this is described in a 17th century Robert Herrick poem:

Down with the rosemary, and so
Down with the bays and mistletoe;
Down with the holly, ivy all
Wherewith ye dress'd the Christmas hall;
That so the superstitious find
No one least branch there left behind;
For look, how many leaves there be
Neglected there, maids, trust to me,
So many goblins you shall see.

So, this year we are following a centuries old tradition and keeping ourselves cheerful at the same time.