This year, to cheer ourselves up, during the very dark days and evenings, we decided to observe Candlemas traditions, and leave our Christmas lights up. 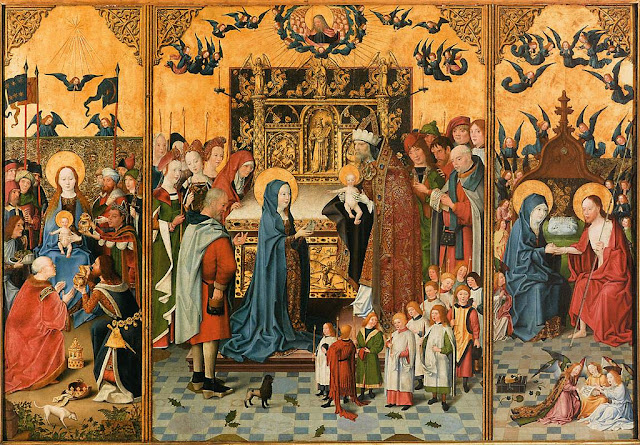 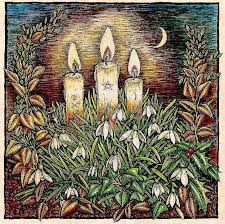 In many cultures, including in some Latin countries today, Candlemas marks the end of the Christmas season. It is celebrated on February 2nd, the 40th day after Christmas. So Tuesday is the day we must take down our lights.

Down with the rosemary and bays,
Down with the misletoe ;
Instead of holly, now up-raise
The greener box (for show).

Then youthful box which now hath grace
Your houses to renew ;
Grown old, surrender must his place
Unto the crisped yew.

When yew is out, then birch comes in,
And many flowers beside ;
Both of a fresh and fragrant kin
To honour Whitsuntide.

Green rushes, then, and sweetest bents,
With cooler oaken boughs,
Come in for comely ornaments
To re-adorn the house.

Like Christmas, Candlemas also has its secular side. In some prosperous manors of old England, this extension of Christmas-tide was marked by music, dancing, games and feasting: A "lord of misrule," or "abbot of unreason" was appointed, whose duty it was to play the part of a buffoon. In addition:

"The larder was filled with capons, hens, turkeys, geese, ducks, beef, mutton, pork, pies, puddings, nuts, plums, sugar and honey.... A glowing fire, made of great logs, the principal of which was termed the 'Yule log,' or Christmas block, which might be burnt till Candlemas eve, kept out the cold; and the abundance was shared by the lord's tenants amid music, conjuring, riddles, hot-cockles, fool-plough, snap-dragon, jokes, laughter, repartees, forfeits, and dances."

We won't be filling our larder with all of these items, but we will get some special food in and enjoy a hot toddy or two. We'll stoke up the fire and light all the candles. I wish we could invite friends round for "jokes, laughter and repartee" but we can't, so I'll just have to brush up my jokes and try and make Chris laugh.