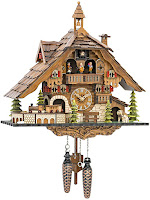 Last year I bought Chris an authentic Bavarian cuckoo clock for his birthday. He'd wanted one for years, but had always been concerned about the cuckoo "cuckooing" all night! So, when I found a clock which operates on solar power, we had to have it.

Until the other evening, everything was fine. The cuckoo wakes up at about 6am and goes to sleep about 10pm. So, all is well. However, one evening last week, we were woken up at midnight by the cuckoo trilling out the time.... It was very spooky. The sound of the cuckoo in the pitch dark! 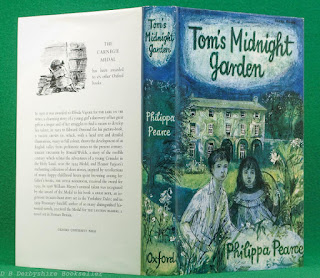 I found myself, half asleep, counting the cuckoos. I was almost expecting there to be 13, as there were in one of my favourite books as a child: Tom's Midnight Garden. Here, when the grandfather clock strikes 13, Tom is transported back in time to the house and garden, 100 years earlier.

I've always been fascinated by time-slip books, the concept of people travelling back in time is engrossing. Amongst my favourite time-slip books are Bedknob and Broomstick (the novel, not the Disney film!) and The Amazing Mr Blunden. Together, with Tom's Midnight Garden, they have an eerie atmosphere and make time travel appear totally credible.

Anyway, the cuckoo stopped at 12 cuckoos, so I remained firmly in 2021 and wasn't transported to Over Kellet in 1921. How fascinating would that have been!