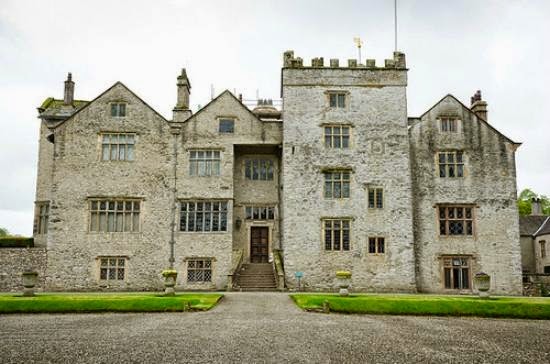 Today we visited Levens Hall. Levens Hall is an Elizabethan house, originally built around a 13th century Pele Tower. The Hall is situated about 5 miles south of Kendal and close to Heversham and Milnthorpe.

One of my favourite literary connections is that Mrs Humphrey Ward, granddaughter of Dr Arnold of Rugby School and author of Tom Brown's Schooldays; and niece of Matthew Arnold, the poet, rented the Hall and used it as the inspiration for Bannisdale in Helbeck of Bannisdale.

"It was built of grey stone, covered with a rough-cast, so tempered by age to the colour and surface of the stone, that the many patches where it had dropped away produced hardly any disfiguring effect. The rugged pele tower, origin and source of all the rest, was now grouped with the gables and projections, the broad casemented windows, and deep doorways of a Tudor manor-house."

In this neglected Victorian classic, Ward portrays a stormy relationship between an atheist woman and a Catholic man who fall in love. Ward's own father had converted to Catholicism and this had caused divisions in her family.

Helbeck of Bannisdale was controversial in its day. Ward had submitted the manuscript to her Catholic father first because she didn’t want to offend him. He approved it, but Protestant critics complained her depiction of Catholicism was too favorable, while an eminent Catholic priest condemned it as a caricature of Catholicism.

It was lovely to walk around Levens Hall, and imagine Mrs Humphrey Ward living there and writing this wonderful book.
Books Places