Growing up in the 1960s and 70s, I spent many long hours browsing in record shops. In fact, one of my earliest memories is, at the age of 4 or 5, sitting in a listening booth in a record shop somewhere in Brighton before being treated to my first ever 45rpm single. I wish I could remember the artist - it was one of those 1960s female vocalists: Sandie Shaw? Petula Clark? Dusty Springfield? 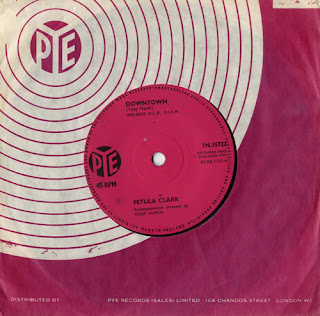 Singles came in very simple covers, often just a paper bag with a hole so you could see the record label. Some singles had an enlarged hole so that they could be loaded into pub jukeboxes. Every few weeks the records in the jukebox would be changed, reflecting the movements in the 'hit parade', and the records that were removed would often be sold or given away: a kind of grey market for slightly out of date - but often classic - songs. The enlarged centre hole told your friends that you knew someone in the music trade and were 'well connected'!

I remember the excitement as a load of 'ex juke box' singles would occasionally arrive in the house: several decades before streaming and pirated downloads, this was the only way to get free music. 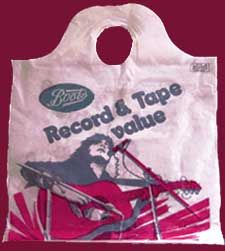 Brighton had a good music scene and was well served by record shops. As well as the dedicated shops, some specialising in particular music genres, some more general shops also stocked a range of records. You could, for example, buy records in many branches of Boots the Chemist, including their large branch on Brighton's Western Road.

As the 1970s progressed and record players were replaced by hi-fi, the idea of buying a record that had already been played (and very possibly scratched) in the record shop became unacceptable. The listening booths died out but the record shops didn't seem to suffer.

CDs arrived in the 1980s and record shops adapted to the convenient, new format which was widely welcomed. The shops were still selling a physical medium and they could now offer an even wider selection to customers. Some people 'upgraded' their records to CDs which was good news for the shops.

Twenty years after CDs were introduced the ability to download songs from the internet, mostly illegally at that time, started having an impact on the sale of CDs although few imagined that now, a further 20 years on, CDs have more or less disappeared, as have record shops. Ironically we now have a renewed interest in vinyl but it's not really enough to sustain many physical retailers.

Undoubtedly we now have access to far more music than someone living in the 1960s could imagine - for £10 per month we can stream from a library of several million tracks. And thanks to rose-tinted glasses we tend to forget the frustration of trying to find a record that was sold-out in all the local shops.

But the demise of the record shop is definitely a sad loss for anyone who remembers the excitement of bringing home a new record and then showing it off to friends who would sit around the hi-fi, listening intently as you played it repeatedly. No-one can say that streaming a track - however good it is - is exciting.