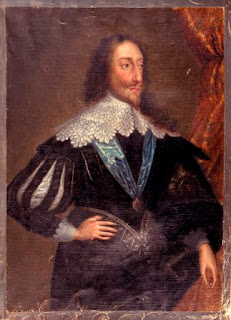 Today is the of anniversary of Richard Crashaw's death in 21st August 1649.

Whilst all my fellow literature students where falling in love with the Romantic poets, the Brontes and Alfred, Lord Tennyson, I was obsessed with this obscure 17th century poet. Not for me the flowing locks and revolutionary tastes of Wordsworth and his friends, but rather the vibrant stylistic ornamentation of this passionate and zealous Catholic convert!

I don't know why I love Crashaw's poetry so much. On the surface there are very few reasons why I should love his poetry. I don't have much in common with this 17th century Anglo-Catholic convert but, in spite of this I adore his overblown metaphors and style, and he is the only real exponent of the Baroque in England. Although he is often categorised with those of the contemporary English metaphysical poets, including John Donne and George Herbert, he also exhibits similarities with the Baroque poets and influenced in part by the works of Italian and Spanish mystics. His work draws parallels "between the physical beauties of nature and the spiritual significance of existence". His work is said to be marked by a focus toward "love with the smaller graces of life and the profounder truths of religion, while he seems forever preoccupied with the secret architecture of things".

Whilst thrilling to Crashaw's metaphors, I was also enjoying the rather more English and conservative (by comparison) Metaphysical poets such as Donne, Herbert and Marvell. Crashaw also led me to explore other mystic and spiritual poets and writers, including Gerard Manley Hopkins, Robert Southwell and Francis Thompson.

His poetry opened up a world for me which has enriched my reading and understanding. His poetry isn't to everyone's taste, I know, but I love him.

Oh, how oft shalt thou complain
Of a sweet and subtle pain,
Of intolerable joys,
Of a death in which who dies
Loves his death, and dies again,
And would forever so be slain,
And lives and dies, and knows not why
To live, but that he thus may never leave to die.

“Eyes are vocal, tears have tongues,
And there are words not made with lungs”
Crashaw's metaphors sometimes go too far, as with his oft quoted "two walking baths, two weeping motions, portable and compendious oceans". But even then, it is easy to see that he wants to show the enormity of Mary's grief.
One of my favourite literary moments, was reading Barbara Pym's The Sweet Dove Died and she quotes Crashaw "she's for the Moors and martyrdom". It was amazing to realise that Pym knew and loved Crashaw, too.
Books Poetry