For Chris's birthday we decided to have a trip up to the Scottish Borders. We overnighted at Dryburgh Abbey Hotel, set in the grounds of Dryburgh Abbey on the River Tweed. Such a peaceful spot, and a favourite of ours. 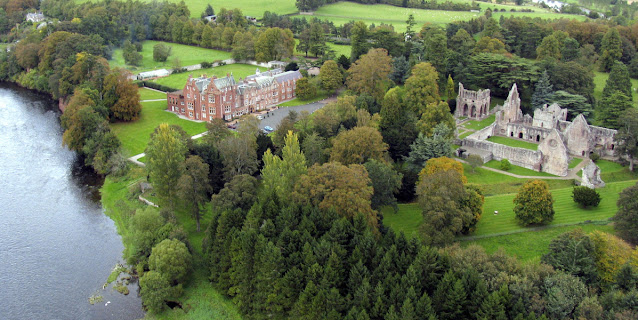 The Abbey is the final resting place of Sir Walter Scott, who lived most of his life at nearby Abbotsford. 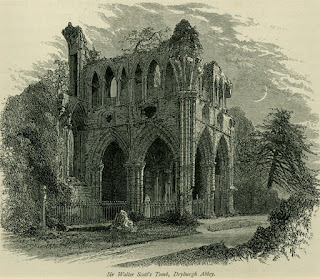 So there, in solemn solitude,
In that sequester’d spot
Lies mingling with its kindred clay
The dust of Walter Scott !

Ah ! where is now the flashing eye
That kindled up at Flodden field,
That saw, in fancy, onsets fierce,
And clashing spear and shield,

The eager and untiring step,
That urged the search for Border lore,
To make old Scotland’s heroes known
On every peopled shore...

Extract of a poem found in The Gazetteer for Scotland.

It seems so fitting that this beautiful place should be the final resting place for Scotland's most important writer, who is often considered both the inventor and the greatest practitioner of the historical novel. Walter Scott was called by his early nineteenth-century readers the Magician of the North.  His supposed invention of Scotland does indeed seem like an act of magic.  Through his poems and novels, Scott created animage of Scotland that is still alive and well today even though very few people read his novels and still fewer his poems. His is a Scotland of sublime Highland landscapes punctuated by dark lochs and splendid castles and peopled by courageous heroes in kilts.

Margaret Oliphant wrote in 1871 “a hundred years ago there was no Scott known in Scotland.  No Scott! No genius of the mountains, shedding colour and light upon their mighty slopes; no herald of past glory, sounding his clarion out of the heart of the ancient ages; no kindly, soft-beaming light of affectionate insight brightening the Lowland cottages....No Highland emigration could depopulate those dearest hills and glens as they are depopulated by this mere imagination.  A hundred years ago they were bare and naked—nay, they were not, except to here and there a wandering, hasty passenger.”

Walter Scott first made his mark in the literary world not as a writer, but as an antiquarian.  In 1802 he published Minstrelsy of the Scottish Border, a collection of ballads he gathered during his rides through the borders as Sheriff deputy for Selkirk. One of his most popular and successful novels is The Antiquary. The eponymous hero is an amateur historian, archaeologist and collector of items of dubious antiquity and very much like David Erskine, 11th Earl of Buchan, and antiquarian,who bought the land on which Dryburgh Abbey is built, in 1786 and set about saving as much as he could of the Abbey. 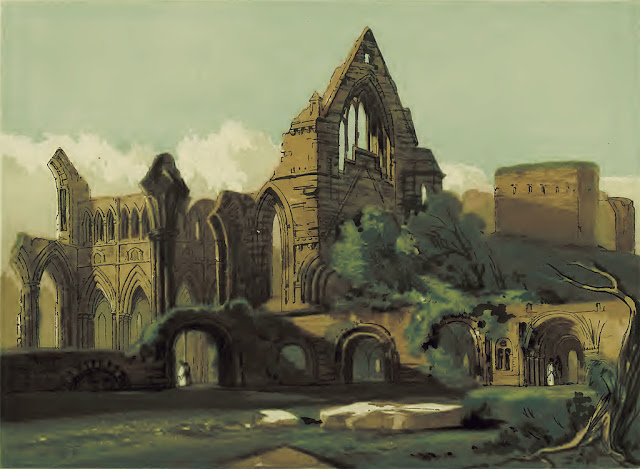