Last weekend we returned to live theatre (unless you count the Gilbert and Sullivan Festival in the summer. Chris doesn't!!).

We chose to watch a Brian Rix-esque farce at The Theatre by the Lake, in Keswick - Home, I'm Darling. It was absoutely fabulous. I hadn't realised how much I had missed live theatre during COVID-19.

Laura Wade’s blistering comedy takes a timely scalpel to gender roles in modern Britain through the eyes of a 21st-century couple slowly discovering that nostalgia isn't what it used to be. Judy and Johnny are the, seemingly, sickeningly happy couple. Judy has chosen the role of 1950s housewife, whilst Johnny goes out to work, as a second rate estate agent.

However, behind the gingham curtains, home made lemon curd and conjugal bliss, their marriage is falling apart. 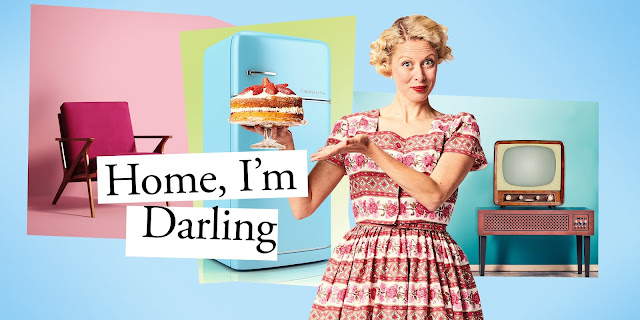 Performed in the round, the performance felt very intimate and relevant. As the product of parents who married in the 1950s and raised their families in the late 1960s, we totally identified with the clearly defined family roles of breadwinner and homemaker. Were people happier with these roles? Probably not, we decided. Johnny and Judy clearly decided the same by the end of the play!

To make the evening even better we started off with a meal at the Lodore Falls, on Derwentwater, and enjoyed the play from a box! Such luxury!