We were so pleased, today, to be able to enjoy a talk at the wonderful Kendal Mountain Festival. Last year, all the talks were online, so there was something very special about being there in person this year.

There was a definite buzz at the Brewery Arts Centre, where the Festival is held. Over coffee, before the event, we chatted to some other Festival goers, and we all agreed that we were very happy and excited to be there.

Our choice of talk was Philippa Harrison's Mountain Republic. This book, published earlier this year, is an epic tome covering the 90 square miles of the Parish of Crosthwaite, in the Lake District. Harrison and her husband moved to the Parish when they retired, living in Canon Rawnsley's vicarage. 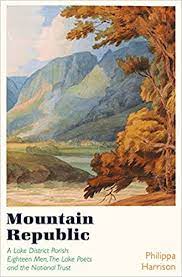 "Bounded by the peaks of Scafell, Skiddaw and Helvellyn, and embracing such well-known landmarks as Borrowdale, Derwentwater and Keswick, it lies within the heart of the Lake Poets' landscape and was home to Hardwicke Rawnsley, co-founder of the National Trust."The Parish also boasts a remarkable history. Its 90 square miles were governed, from medieval times, by eighteen annually chosen 'customary tenants'; ancestors of the people who later prompted Wordsworth's portrayal of the area as 'a perfect Republic of Shepherds and agriculturalists'. His fellow poet Robert Southey lived within the Parish for forty years, was an active parishioner and rests in St Kentigern's churchyard. Here he is given his rightful position as a Lake Poet. In the nineteenth century, the Victorian state killed off the old parish system, sweeping away the egalitarian rule of the Eighteen Men. But a degree of redemption was at hand. Canon Rawnsley, vicar of Crosthwaite from 1883, pledged to defend the Lake District for future generations. So the Parish was at the heart of the creation of the National Trust and blazed a trail for a wider movement to preserve the English landscape."

The talk was wide-ranging, covering over 1,000 years, from the Anglo-Saxons and Normans up to the mid-Nineteenth century. Harrison unwrapped the impact the Parish had had on the people who lived there, and conversely, the impact of industry, literature, farming and tourism on the Parish.

We thoroughly enjoyed the talk and I feel inspired to read some of the books Philippa Harrison referred to in her talk. I've already read Mountain Republic, but I think I'll re-read some chapters more closely.

What a treat for a November Sunday!