The Temple of the Muses - Dryburgh

Whilst staying at the Dryburgh Abbey Hotel we decided to explore some of the local landmarks and curiosities. We enjoyed some glorious Autumn weather so were able to make the most of our first destination:  Scott’s View is probably the most famous view in the Borders. It was Sir Walter Scott’s favourite view and the story is told that when his funeral cortege was making its way to Dryburgh, the horses stopped, unbidden, at the spot – they were so used to stopping there during Scott’s visits to the area. The view takes in the Eildon Hills, the River Tweed and the Abbey at Melrose.

Our next destination was the River Tweed and the ruins of Dryburgh Abbey. The Tweed was fast flowing and swollen after weeks of rain. Finally, we walked through the Abbey's parkland to the Dryburgh suspension bridge, over the River Tweed, to visit the Temple of the Muses folly. This folly was built by the eccentric 11th Earl of Buchan towards the end of the 18th century. Whilst a fan of Scotland's revered national poet - Robert Burns, the Earl of Buchan's admiration for James Thomson amounted almost to awe. James Thomson was a local man, having been born in nearby Ednam, and the poet of The Four Seasons, published in 1730.

There’s no explanation for what was practically an obsession on the part of Buchan, but he lobbied for monuments and memorials to Thomson in Scotland and London as well as building his own tribute – the Temple of the Muses.

The Temple has changed since it was originally built. The original Temple had nine columns, and on the capital of each was the name of one of the nine muses, inscribed in metallic characters: Clio, Euterpe, Thalie, Melpomene, Terpischore, Erato, Polyhymnie, Uranie and Caliope, the ‘elegant relievo letters’ being the work of John Ruthven of Edinburgh. On top of the dome a ‘beautiful imitation, in stone, of the lyre of Terpischore, found in the ruins of Herculaneum, is surmounted by a bust of Thomson, also cut in stone’. 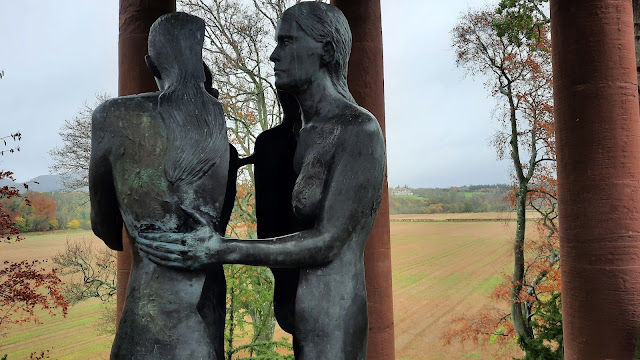 Today's Temple is very different. In 2002, following some remedial work, a new bronze statue, representing the Four Seasons, was commissioned from Siobhan O’Hehir.

Whatever its provenance and despite the changes, I found the Temple very beautiful and rather moving. To find a tribute to a poet in such a quiet and lonely place is hard to describe and, that this poet was the forefather of the Romantic poets, made it even more memorable