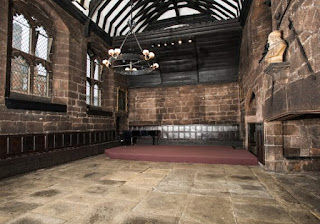 On Friday we headed over to Manchester, to Chetham's Music School, to listen to Gothic Voices perform early Christmas music. They performed in the Baronial Hall, one of Manchester's oldest buildings and a Medieval gem. A wonderful venue in which to enjoy the amazing Gothic Voices.

The concert was an early Christmas celebration, with carols and sections from masses by composers both known and anonymous and dating from the 12th to the 15th centuries. It was absolutely glorious and the music soared to this rafters of the beautiful building. 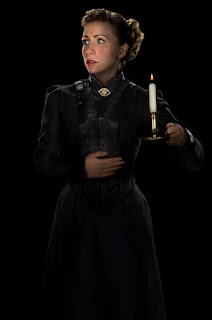 Our second foray into the Gothic, was a performance of Christmas Gothic by Dyad Performance at the Dukes Theatre, in Lancaster. A friend booked the tickets, as one of our pre-Christmas treats, and we admitted, to each other, that we probably wouldn't have chosen this particular show. But, gosh, we were glad that we went along!

Dyad Productions resurrected a Victorian tradition by presenting three seasonal tales of terror to scintillate the gooseflesh for dark Christmas nights. This celebration of Christmas was adapted and performed by Rebecca Vaughan, in a one woman show. She was absolutely amazing, a tour de force, and reminded me of the one-man Christmas performances of Charles Dickens, and the ghost stories of M R James. My skin tingled and my heart beat a little faster.

All in all we had a fabulous weekend steeped in all things Gothic. I'm considering a quick read of a couple of Gothic novels to complete the immersion. Maybe a Mrs Radcliffe or a spot of Horace Walpole.