Sometimes, strange things happen when reading a number of different books at the same time. I'm reading Rebecca Tope's The Threlkeld Theory, as well as a book about the Silver Fork novelists, who flourished from the 1820s to the mid 19th century. In Tope's novel she mentions Edward Bulwer-Lytton, one of the main exponents of this literary trope. Such a strange coincidence!

Edward Bulwer-Lytton was a Victorian politician and writer, best known for his contribution to the Silver Fork genre, as well as being the author of one of the first Science Fiction novels The Coming Race.

Strangely, Bulwer-Lytton also gave his name to the literary prize of the same name. The Bulwer-Lytton prize was founded in 1982 and challenges all entrants to compose opening sentences to the worst of all possible novels.The founder of the prize Professor Scott Rice chose the opening sentence of Bulwer-Lytton's novel The Last Days of Pompeii as his best (or worst) example "It was a dark and stormy night"... 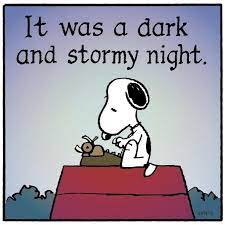 "It was a dark and stormy night; the rain fell in torrents—except at occasional intervals, when it was checked by a violent gust of wind which swept up the streets (for it is in London that our scene lies), rattling along the housetops, and fiercely agitating the scanty flame of the lamps that struggled against the darkness."

This sentence was, of course, plagiarized repeatedly by Snoopy in the cartoons!

Every year writers are encouraged to enter with their worst possible opening sentence. The 2021 winner, Stu Duval, produced this ghastly effort:

"A lecherous sunrise flaunted itself over a flatulent sea, ripping the obsidian bodice of night asunder with its rapacious fingers of gold, thus exposing her dusky bosom to the dawn’s ogling stare."

Bulwer-Lytton's work was considered to represent "the archetypal example of a florid, melodramatic style of fiction writing".

As I love a spot of Silver Fork writing, I'm now considering which of Bulwer-Lytton's novels to read. Unlike the character in Rebecca Tope's novel, I don't think I'll be reading the complete oeuvre!