On Friday we met a friend for coffee, and she suggested the Café at Lancaster Castle. I'm ashamed to say that this was our first visit to the Castle, since it was decommissioned as a Category A prison.

We were blown away by the work that has been done to restore the Castle, remove the former prison buildings and reveal this stunning Medieval building.

Lancaster Castle, often known as John O’ Gaunt’s Castle, is one of the most historically fascinating surviving buildings in the country. Its beginnings date back to Roman times when, from its commanding position on the hill overlooking the town of Lancaster and the River Lune, it stood as a bastion against the marauding forces of the ancient Picts and Scots tribes.

Those days might have gone, but the Castle is imposing and visually stunning. It is so well preserved that it's hard to remember just how old some of the buildings are.

We didn't have time for a tour, I'm sure we'll come back and do this soon. However, just standing in the central courtyard of the Castle and gazing around at so many wonderful and history-full buildings was awe-inspiring. Atkinson's coffee shop was also pretty good! 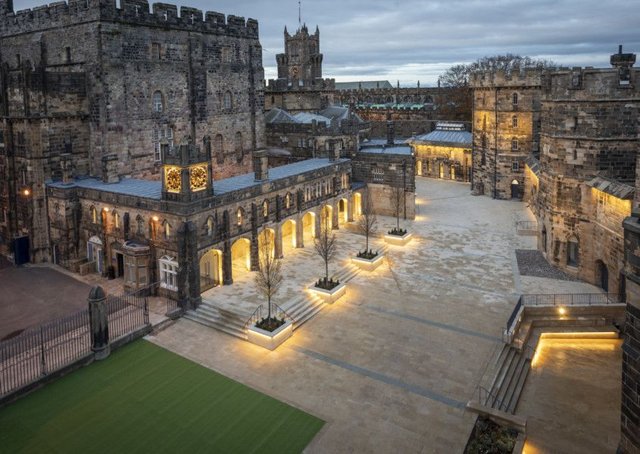 Dark with age these towers look down
Over their once vassal town;
Warlike—yet long years have past
Since they look'd on slaughter last.

Never more will that dark wall
Echo with the trumpet's call,
When the Red Rose and the White
Call'd their warriors to the fight.

Never more the sounding yew,
Which the English archer drew,
Will decide a battle-day
Fast like its own shafts away.

Never more those halls will ring
With the ancient harper's string,
When the red wine pass'd along
With a shout and with a song.

Trumpet, harp, and good yew bow
Are so many memories now,
While the loom, the press, the gun,
Have another age begun.

Yet that old chivalric hour
Hath upon the present power
Changed—and soften'd and refined
It has left its best behind.

What may its bequeathings be?
Honour, song, and courtesy.
Like the spirit of its clay,
Yesterday redeems to-day.