One of my favourite paintings in the Gallery is JMW Turner's painting inspired by James Thomson's Ode on Aeolus Harp. The background of the poem is the view of the Thames from Richmond Hill. The painting commemorates the poet James Thomson who lived near Turner’s vantage point, and published An Ode on Aeolus’ Harp in 1748.

The Aeolian harp was invented in the mid-seventeenth century by Athanasius Kircher. It is a stringed instrument played by the wind. In Greek mythology, Aeolus was the kings of storms, and keeper of winds. The traditional form of the harp is a wooden box across which strings are stretched. It is usually placed in a window, so that the wind can blow across the strings, thus vibrating them, to produce harmonic sounds. It became a metaphor of both poetry and healing. 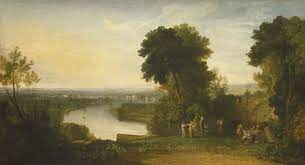 Ethereal race, inhabitants of air,
Who hymn your God amid the secret grove,
Ye unseen beings, to my harp repair,
And raise majestic strains, or melt in love.

Those tender notes, how kindly they upbraid!
With what soft woe they thrill the lover’s heart!
Sure from the hand of some unhappy maid
Who died of love these sweet complainings part.

But hark! that strain was of a graver tone,
On the deep strings his hand some hermit throws;
Or he, the sacred Bard, who sat alone
In the drear waste and wept his people’s woes.

Such was the song which Zion’s children sung
When by Euphrates’ stream they made their plaint;
And to such sadly solemn notes are strung
Angelic harps to soothe a dying saint.

Methinks I hear the full celestial choir
Through Heaven’s high dome their awful anthem raise;
Now chanting clear, and now they all conspire
To swell the lofty hymn from praise to praise.

Let me, ye wandering spirits of the wind,
Who, as wild fancy prompts you, touch the string,
Smit with your theme, be in your chorus joined,
For till you cease my muse forgets to sing.