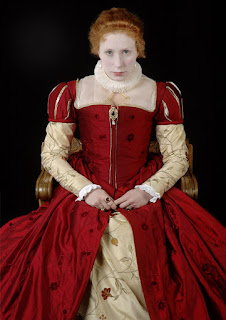 On Friday, we enjoyed a performance of I, Elizabeth at the Heron Theatre in Beetham. The production was by Dyad Productions, a solo performance by Rebecca Vaughan. She was magnificent and every inch the Virgin Queen.

1568: At a vital crossroads in history a young Queen steps from the shadows to unburden herself of her many troubles and reveal her innermost thoughts on marriage, succession, religion, war and the challenges to her throne.

Defying the establishment by choosing to lead her country alone, she forsakes her own dreams and desires in order to steer England towards national and spiritual security. But time is against her...

Elizabeth I: Queen at 25, political phoenix and famously unmarried, she was the most educated woman of her Age - but who was the woman beneath the crown? Traitor, bastard, heretic or prisoner: call her what you like.

Dyad Productions successfully explored the Queen's struggle to reconcile the desires of womanhood with the duties of sovereignty. For just over an hour we were swept away into the intrigues and machinations of Sixteenth Century England.