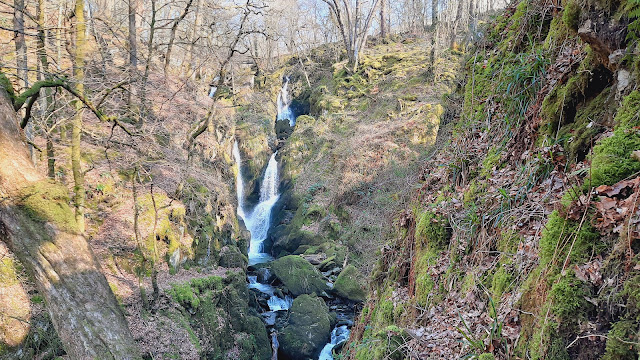 The weather today was so glorious that we changed our plans and decided on a trip to Ambleside and a walk. Ambleside is a wonderful place to start a walk. Most visitors think that this small town is all about shops and restaurants and, of course, Lake Windermere, but there's so much more to explore. Today we decided to walk up to Stock Ghyll Force and enjoy the waterfall.

There are so many literary associations connected with Stock Ghyll Force, as well as Ambleside being a favourite haunt of  the Victorians. Eliza Lynn Linton wrote in 1864:

"Many and beautiful are the walks about Ambleside, walks within a reasonable distance for any fair pedestrian, and which all but very fine ladies, or very delicate ones, may take without too much fatigue, and without risk or danger if they are moderately careful."

"It is buried in trees, in the bottom of the valley - the stream is interesting throughout but the waterfall itself, which I came suddenly upon, gave me a pleasant twinge. First we stood a little below the head about half way down the first fall, buried deep in trees, and saw it streaming down two more descents to the depth of near fifty feet. Then we went on a jut of rock nearly level with the second fall-head, where the first fall was above us, and the third below our feet still. At the same time we saw that the water was divided by a sort of cataract island on whose other side burst out a glorious stream — then the thunder and the freshness. At the same time the different falls have as different characters; the first darting down the slate rock like an arrow; the second spreading out like a fan; the third dashed into a mist — and the one on the other side of the rock a sort of mixture of all these. We afterwards moved away a space, and saw nearly the whole more mild, streaming silverly through the trees. What astonishes me more than anything is the tone, the coloring, the slate, the stone, the moss, the rockweed; or, if I may so say, the intellect, the countenance of such places. The space, the magnitude of mountains and waterfalls are well imagined before one sees them; but this countenance or intellectual tone must surpass every imagination and defy any remembrance. I shall learn poetry here and shall henceforth write, more than ever, for the abstract endeavour of being able to add a mite to that mass of beauty which is harvested from these grand materials, by the finest spirits, and put into ethereal existence for the relish of one’s fellows. I cannot think with Hazlitt that these scenes make man appear little. I never forgot my stature so completely; I live in the eye, and my imagination, surpassed, is at rest." 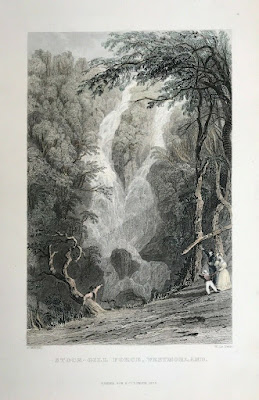 Thomas West's pioneering Guide to the Lakes (1778) advises tourists to visit Stock Ghyll Force on account of its "singular beauty and distinguished features" even in dry seasons. Joseph Budworth devoted a chapter of his A Fortnight's Ramble to the Lakes in Westmoreland, Lancashire, and Cumberland (1792) to Stock Ghyll Force. He was particularly struck by the "rocky, yet verdant, island, which separates the upper fall, and makes two distinct flushes", and assured his reader that, having made the short walk to the falls "you will be repaid by too impressive a sight ever to leave your memory, and which is calculated to remind you of the softest moments of your life".

William Wordsworth, writing in 1835, recommended visitors to Ambleside to spend three minutes looking at the course of Stock Ghyll through the village, adding that "Stockgill-force, upon the same stream, will have been mentioned to you as one of the sights of the neighbourhood". Victorian writers confirm that the waterfall was the standard sight of Ambleside, the first that any tourist went to visit. Indeed it was so often and so easily seen that the writer Harriet Martineau reported that "it is the fashion to speak lightly of this waterfall", familiarity breeding contempt, though she herself thought it an "exquisite waterfall...Grander cataracts there may be—scarcely a more beautiful one"
Places Poetry Walks