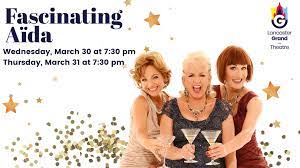 It's been a few years since we last saw Fascinating Aida on stage. We had a couple of attempts during COVID, but each time the show had to be cancelled. So, we were delighted when we discovered that they were performing at Lancaster's Grand Theatre.

The girls were amazing, as ever. Witty, rude and outrageous! We had a fabulous evening. Particular highlights were the updated Bulgarian Song Cycle and German. Dillie, Adele and Liza were on top form. There was also a new member of the group: Michael, who accompanied the songs on the piano.