Last weekend we visited Sussex for our niece's graduation in Brighton. Alfred, Lord Tennyson made his home at Aldworth, near the lovely village of Lurgashall. His description of Sussex sums up why so many writers and artists chose to make their home in this beautiful county.

You came, and looked and loved the view
Long-known and loved by me,
Green Sussex fading into blue
With one gray glimpse of sea.

We stayed in Rottingdean and, whilst we were there, soaked up the multifarious literary connections in the area.

Rottingdean is positively stuffed full of famous literary names. Rudyard Kipling lived at the Elms in the village and whilst there he wrote Stalky and Co, my favourite Kipling novel. Kipling was the nephew by marriage of Edward Burne-Jones. The pre-Raphaelite Burne-Jones family also lived in Rottingdean and St Michael's Church has a number of pre-Raph windows.Next, in the long list of Rottingdean literary associations is Angela Thirkell. Thirkell wrote the wonderful Barsetshire novels, based in Trollope's imaginary Barsetshire and spanning the pre, mid and post war years. Thirkell's mother was the daughter of Sir Edward Burne-Jones the famous Pre-Raphaelite painter and designer in William Morris’ Design Company. Thirkell's ashes are scattered in the graveyard of St Michael's Church.
Enid Bagnold lived in Rottingdean at North End House, the former home of the Burne-Jones family. It was here that she wrote many novels including the most famous work National Velvet, as well as The Loved and the Envied and The Squire.

William Watson is a less well known former resident of Rottingdean. Watson was a Victorian poet, who fell out of favour. He was a prolific poet of the 1890s, and a contributor to The Yellow Book, though without "decadent" associations, and on the traditionalist wing of English poetry. His reputation was established in 1891, with the publication of "Wordsworth's Grave", and the appearance in The Fortnightly Review,  On the occasion of Alfred Tennyson's death in 1892, he was a strong candidate to be his eulogist, the commission resulting in his "Lachrymae Musarum" . His house was almost opposite the White Horse Hotel, in Rottingdean, where we stayed. 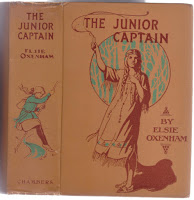 Finally, in my roundup of writers associated with Rottingdean is Elsie J Oxenham, author of the Abbey Girls series. In addition to her most famous series, she also wrote the Sussex Books, all set in a fictional school near Rottingdean (probably Roedean).

We had a splendid time mooching around Rottingdean and moved onto a few more Sussex literary hotspots.

All in all a splendid visit!