HMS Pinafore and the Zoo

Thursday evening found Bernie, my G&S chum, and I enjoying a sparkling performance of HMS Pinafore at the Lowry Theatre.

We've really missed Gilbert and Sullivan over the last couple of years and so, we're hoovering up as many performances as we can.

HMS Pinafore is one of G&S's best operas, full of fabulous songs and telling the entertaining tale of love, duty and rank. As Josephine falls in love with the “lowly sailor” Ralph Rackstraw, she is torn between honouring her heart’s desire or the wishes of her father Captain Corcoran. 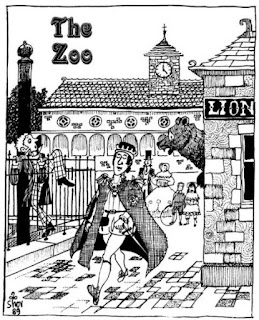 As Pinafore finished we segued into a performance of The Zoo, almost without missing a beat. The Zoo is rarely performed and isn't a Gilbert and Sullivan collaboration. Instead the score was written by Bolton Rowe with music by Sullivan.

The Zoo is an hilarious tale of two pairs of lovers, a very opinionated British Public, and a Gorilla! I've only seen this little known operetta performed twice before and I wasn't particularly impressed on either occasion, but last night's performance was really good and fast paced.

The farcical story follows the fortunes of two pairs of lovers. First, a nobleman, who goes to the zoo to woo the girl who sells snacks there. He tries to impress her by buying and eating all of the food. The other couple is a young chemist who believes that he has poisoned his beloved by mixing up her father's prescription with peppermint that her. As with HMS Pinafore the Zoo explores issues of class and the absurdity of the British class structure. I love the anti-establishment undertones of G&S!

We thoroughly enjoyed both performances and feel that we are now in training for the marathon Gilbert and Sullivan Festival later this summer!