Chris and I have a fascination with the Picturesque and especially the works of William Gilpin and Thomas West. Over recent years we have added to our collection of William Gilpin Tours and Guides, as well as acquiring Thomas West's Guide to the Lakes and, most recently, Peter Crosthwaite's Seven Lake District's Maps. 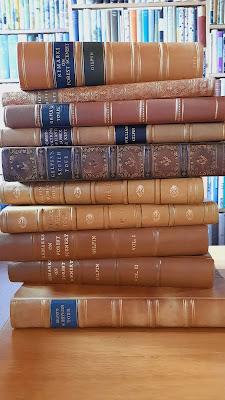 Thomas West transplanted the idea of pilgrimage (the stations of the cross became the stations of the pictureque views) onto the lakes and mountains of the Lake District. His stations became viewpoints that offered "in so sublime a style, with such beautiful colourings of rock, wood and water". His pilgrimage formed a loose anti-clockwise circuit via Hawkshead, Ambleside, Keswick, Penrith, Shap and Kendal, taking in all the major lakes.

Picturesque means 'like a picture' and, as Jonathan Bate notes in The Song of the Earth, "the early tourists went armed with guidebook, sketchpad, Claude glass and sometimes camera obscura". The guidebook directed the tourist to the most Picturesque prospects, usually located on the shores of the larger lakes, and once there he would turn his back on the landscape, look at it reflected in the Claude Glass, and make a sketch or write a description. This practice may seem strange and, indeed, it was lampooned at the time in the satirical cartoon Dr Syntax in Search of the Picturesque. Yet, as Bate suggests, modern tourists have their own equivalent: "When we see an especially fine view, we take a photograph of it. If we stop and think about the procedure, this is a rather strange thing to do".

This summer we are planning to visit as many of the stations as possible. We won't be traveling with a Claude glass but we will be using cameras, probably on our mobile phones, to capture beautiful landscapes and exceptional scenery.