Next, our tour took us to Brougham Castle. Ann Radcliffe visited in 1794 and described Brougham as if it were the setting for one of her Gothic novels:

"Some of the walls remaining are twelve feet thick, and the places still visible, in which the massy gates were held to them by hinges and bolts of uncommon size. A fuller proof of the many sacrifices of comfort and convenience, by which the highest classes in former ages were glad to purchase security, is very seldom afforded, than by the three detached parts still left of this edifice; . . . they exhibit symptoms of the cruelties, by which their first lords revenged themselves upon others the wretchedness of the continual suspicions felt by themselves. Dungeons, secret passages and heavy iron rings remain to hint of unhappy wretches, who were, perhaps, rescued only by death from these horrible engines of a tyrant's will. The bones probably of such victims are laid beneath the damp earth of these vaults." 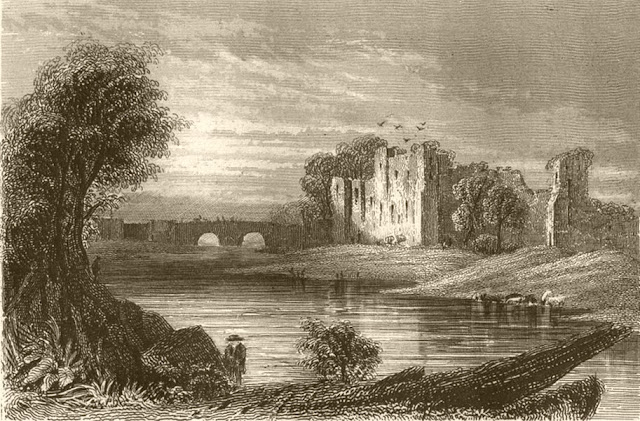 We visited on a sunny July day and it was difficult to imagine this dark, Gothic edifice! A more uplifting, but sadly untrue, version of the Castle's inhabitants, is also included in Radcliffe's account of Brougham as:

"rendered more interesting by having been occasionally the residence of Sir Philip Sidney; who had only to look from the windows of this once noble edifice to see his own 'Arcadia' spreading on every side. The landscape probably awakened his imagination, for it was during a visit here, that the great part of the work was written."

It seems that this mistake was started by Clarke in his 1789 Survey of the Lakes. Sir Philip Sidney was never in the Lakes, although Wordsworth picked up the takes and wrote in The Prelude:

A mansion visited (as fame reports)
By Sidney, where, in sight of our Helvellyn,
Or stormy Cross-fell, snatches he might pen
Of his Arcadia.
Dorothy and William Wordsworth often walked in the woods near Brougham and William writes of these walks "by the varied banks of Emont" in Book 6 of The Prelude:
And that monastic Castle, mid tall trees.
Low-standing by the margin of the stream,
and how he and Dorothy:
having clomb
The darksome windings of a broken stair,
And crept along a ridge of fractured wall,
Not without trembling...in safety looked
Forth, through some Gothic window's open space,
And gathered with one mind a rich reward
From the far-stretching landscape, by the light
Of morning beautified, or purple eve.
Finally, and rather thrillingly, I have discovered a novel Brougham Castle by Jane Harvey which is "situated near the boarders of the last-named county on the banks of the river Eastmont, and not far from its confluence with the Lowther". Brougham Castle was published in 1816 but set in 1636. The synopsis of the novel sounds rather complicated and rather sensational, hinting at incest and confused identities. I'm already searching for an early edition of the novel. So far I've not had any luck, so I might have to purchase a print on demand edition, as my appetite is thoroughly whetted.
Books Places Poetry Ruins