Falaise Castle and William the Conqueror

Whilst in Northern France recently, we visited the small town of Falaise, the birthplace of William the Bastard or, as we more commonly know him, William the Conqueror.

The castle birthplace of William was impressive, but this wasn’t what caught my attention. In the main hall of the castle there is an exposition of the important moments of this small town and large castle. Amongst the many stories and quotations on the walls, there was one which particularly attracted my attention.

“As I lay sleeping it seemed that a tree grew out of my body. It was so great, so high, so straight, and so marvellous that it reached the sky, there, above us. Its shadow stretched all over Normandy and the sea and the great land of England...”

This quotation is from Herleva’s dream, from the Chronicle of the Dukes of Normandy, by Benoît de Sainte-Maure, around 1170.

What interested me was the connection to Dream Poetry of the Medieval period in England, especially Pearl, Piers the Plowman and Chaucer’s The Book of the Duchess and the House of Fame. 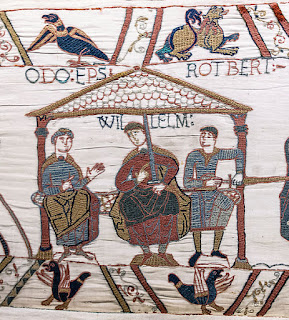 Dream Poetry attempted to explain happenings and give them legitimacy. Dream Poetry also acted as satire, commenting on events and people, in a way which wouldn't otherwise be tolerated. So, I wondered, what is the significance of this quotation in Falaise. I did some research when we got home and discovered that Herleva was William's mother. She wasn't married to Robert the Magnificent, Duke of Normandy, but had caught his eye from the village. They never married, she was his social inferior, but she bore him three sons, William, Odo and Robert.

Benoît de Sainte-Maure writes that on the night that Herleva fell pregnant with William she had a dream where in the dream a tree erupted from within her stomach and grew so big and so tall that it covered all of Normandy, but it did not stop growing there. The tree is said to then grow and cover the English Channel and continue until it covered all of the kingdom of England. Some say the story may have been invented later to give William’s claim even more legitimacy.

I found this early example of Dream Poetry very interesting and a very small, human detail in the vastness of Falaise Castle.